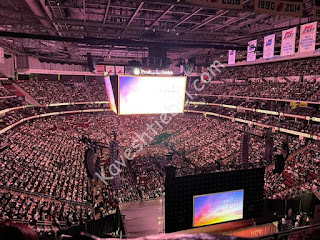 There was another Internet Asifah a few days ago. This one for women only.

It’s been a relatively long time since the last one where Rabbi Ephraim Wachsman implored the audience to heed the words Rav Shmuel HaLevi Wosner, ZTL,  - warning the audience about the dire spiritual consequences if they didn’t. Rav Wosner then went about telling everyone that it was Halachicly forbidden to access the internet.

That took place over ten years ago. Obviously very few people listened to him. Although he later clarified that certain exceptions could be made for work, computers should nonetheless NEVER be found in the home. it did not take long for that edict to be violated as well. That gave rise to internet filters. With that precaution in place very few people avoid having any internet service in their home. (Although there are still some that do not use it at all.) I guess that has caused some problems for the Chasdic world that this Assifah addressed.

The following is a tweet by one Shlomo Felberbaum:

20,000 Chasidic women gathered tonight to hear how dangerous the free access to information is to their lifestyle.

I am not surprised by any of this. I believe the Chasidic insistence on an insular lifestyle makes their attitude about the internet the most extreme in the Charedi world. Their leadership would prefer it not be accessed at all. To the extent that is - is to the extent that their lifestyle is endangered.

I was struck by a series of tweets in response to that Asifah by a Chasidic woman calling herself Chassidish Veibel – (Yiddish for Chasidic wife). By use off that pseudonym she is likely part of the system and not some sort of disgruntled expatriate Chasidic woman who left the fold with a vendetta. She said that what she heard  filled her with a deep sense of rage and pain!

If what she says is accurate, it gives us a glimpse into how Chasidic women are told to lead their lives. Which in my view is about as restrictive and draconian a lifestyle as anyone can imagine. I cannot be very pleasant. I am going to stitch those tweets together for purposes of getting an inside glimpse at what may very well be the way a huge segment of Orthodox women must live.

We are taught from a young age that it is our responsibility not to arouse the men. Don't attract attention with your clothes, your hair, your voice. But remember, you're the עקרת הבית. Be a good wife, do what your husband says.

We try our best. We cut our daughters' hair short, we wear long wide skirts, we don't use our beautiful voices to sing. We move aside for men on the street, we don't drive, we don't involve ourselves in politics.

We daven quietly in shul, we don't print our faces in magazines, we cover up our young daughters' legs. We swim fully clothed, we sit at the back of the bus, we don't express our talents. We try our best not to arouse the men.

But this is not enough. The powers to be have decided to further hide women. We shall not speak on the street at all.

We are now told not to use the internet to network and build successful businesses. Not to post our talented voices/art/dance. Don't be seen. Don't be heard. We try our best, but it is not enough...

Not enough?! What kind of life is that? Who wants to live like this? Surely not Chassidish Veibel. How many more are there like her?

That   being  said, I’m sure that many – perhaps even most Chasidic women live this way and seem to be satisfied and even happy. I’m equally sure that they will defend what was said at the Assifah as an expression of God’s will.

I suppose it’s possible to live like that and be happy, One can be indoctrinated to live with some degree of discomfort if they believe it to be the will of God. And be perfectly happy doing it. They probably get a lot of spiritual fulfillment in that belief. Fulfilling the will of God as their leaders interpret it means that God will someday grant them  their eternal reward.

There is also the sense of accomplishment in raising God fearing children who will carry on their traditions. And there is the Nachas they have from grand children and great grandchildren. They chalk up all these restrictions as necessary in order to live the pure and holy lives they believe these restrictions provides for them. And with all of that they are Sameach B’Chelko – happy with their lot.

But I suspect that there are more than few women like Chassidish Veibel who would like to lead their lives the way the rest of Orthodox Jewry does. Including most the non Chasidic - Charedi Lithuanian Yeshiva world .women.

Unfortunately the  latter community seems to be increasingly adopting many elements from the Chasidic world. That might make some people happy. But my guess is that a lot of Orthodox women, including Charedi women - are not.