Shaking Hands with the Opposite Sex 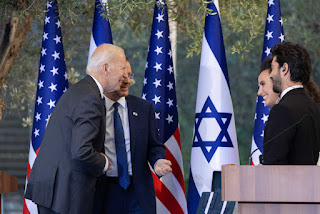 There has been a lot of discussion about an Orthodox Jewish woman’s refusal to shake President Biden’s hand during his recent visit to Israel.  Halacha forbids physical contact between men and women unless they are married to each other or are a close relative (like a parent). There is however disagreement amongst Poskim as to whether this applies unconditionally, or whether it applies only when it is ‘Derech Chiba’ –  in a sexual way.

The Chasidic community subscribes to the former view and avoids all connect between the sexes – including a simple handshake.

I have been told by a Rav who stems from the German Jewish community (Yekke) that - accepting the lenient view as the correct one - observant Jews in pre-war Germany had no problem with platonic physical contact between the sexes. He told me that it was quite common to see an observant Jewish man socially kissing a woman in a ‘peck on the cheek’ fashion.

Many Modern Orthodox rabbis tend towards this opinion as well  Although many others tend to not engage in this practice L’Chatchila - doing so only B’Dieved - as the situation demands. This is generally the practice of the non Chasidic - Lithuanian/Yeshiva community.

Their approach is as follows. They consider the possibility that the stringent view might be the correct view and generally do not have any physical contact between the sexes. However, they rely on the lenient opinion in order to avoid embarrassing someone. When, for example, someone not familiar with Halacha (whether Jew or non-Jew) extends their hand to shake it with a member of the opposite sex they extend their as well to shake it. This is what R’ Ya’akov Kamenetsky used to tell his students to do. This is my custom as well.

Unfortunately in our day, this is not well known. The over focus on Tznius and avoiding interaction between the sexes has caused a lot of non Chasidim to refuse shaking with a member of the opposite sex even if someone that extended it first by someone unfamiliar with Halacha. Thereby causing them some embarrassment. Any explanation that follows about Jewish law does not erase the embarrassment that has already happened.

I am reminded of an incident where the late wife of Chicago Community Rosh Kollel and Posek, Rav Dovid Zucker, was in a situation like that. After addressing an audience at a public event - one of the other speakers went up to her and extended his hand in an obvious attempt to shake it. She refused not being sure about what to do, she thought it was best to avoid contact and did not shake his hand. When Rav Zucker’s wife told him what happened he told her that she should have shaken it and not embarrassed him.

The woman  in Israel that refused to  shake the President’s hand was not a member of the Chasidic community. But just like Rebbetzin Zucker, she was not aware of the correct approach to this issue. This event has renewed the debate. But as far as I am concerned her attempt to be stringent caused needless embarrassment and need not have happened. Had she known she could have avoided that.

But this leniency is not well known. Which is why she is being ‘patted on the back’ by a lot of Charedim (who also don’t know) for standing her ground and not ‘violating’ Halacha..

But this is wrong headed. Being stringent to the point of embarrasing someone is not the Jewish way. Standing up for Halacha is one thing. Embarrassment not withstanding. Standing  up for a Chumra is an entirely different animal. Applied at the cost of embarrassing someone is unnecessary and just plain wrong.

This is the problem with an Orthodoxy that is increasingly moving to the right. The over-focus on Tznius and separation has generated a situation where people incorrectly feel they are being ‘Frummer’ by by embracing a Chumra even if it embarrasses someone.

Being unnecessarily ‘Machmir’ harms our image as a  common sense rational people. Even if it is explained in advance.

And yet that seems to be the direction in which the observamt Jewish community is going This is not progress. This is not ‘growing’ in our Yiddishkeit. It borders on what the Gemarah call being a Chasid Shoteh. That is someone that refuses to save the life of a drowning Jewish woman because she was naked. The way the current climate of RW Orthodox Jewish is going, we are in danger of becoming an entire community of Chasidei Shoteh.