Two Torahs - One for America and One for Israel 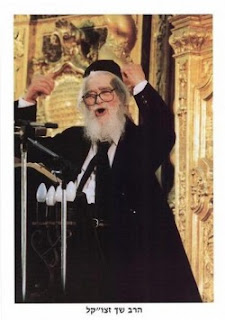 When Rav Shach (pictured left) put Maarava - a Charedi high school that teaches secular subjects - into ‘Cherem’ he explained that a Yeshiva must teach Torah only. The curriculum may not be diluted with any secular studies at all. Maarava is a Chafetz Chaim type Yeshiva and is led by two of Chafetz Chaim’s finest products. It is modeled after its American counterpart. They offer a full curriculum of secular studies. This is in fact the standard type of Charedi Yeshiva curriculum in America. Even Lakewood’s high school in Philadelphia has this type of program.

The Roshei Yeshiva of Maarava have basically ignored Rav Shach and maintained their secular studies program. They are an unqualified success. Their enrollment every year is to capacity. I am told by parents who have sent their children there that despite Rav Shach’s very strong words opposing the school, it was not really an official Cherem.

Furthermore the students who graduate from Maarava are accepted to the finest and most right wing Yeshivos in the country. Their level of learning has not suffered and they do as well there as any other Charedi student. Nonetheless most Charedi parents wouldn’t be caught dead sending their children to this type of school. The attitude of Rav Shach is the one that prevails.

I have often said that Israel should model their Charedi Yeshiva high schools after the American style Charedi Yeshiva style high schools. Not because of my Torah U’Mada Hashkafa that values secular studies as an independent pursuit. But for entirely practical reasons. It would go a long way to help solve the serious poverty problems the Charedi world now suffers.

There are many reasons that Charedim in Israel are the poorest demographic in Israel. But among the most significant ones is the lack of any preparation at all in anything other than learning Torah (mostly Gemarah, Rishonim, and Achronim). True - there are many Talmidei Chachamim coming out of these schools. But the same is true in American Charedi schools. True - there are Israeli Charedim who somehow find good jobs anyway. But the percentages of those in Israel who do compared to those in America are miles apart.

As a side issue some American Charedi Rabbanim and Roshei Yeshiva look eastward. They advocate Torah only with no secular studies. It is my understanding that schools like that already exist. It doesn’t help that Ner Israel Rosh HaYeshiva Rav Aharon Feldman - who was himself a beneficiary of a secular education in an American high school - has advocated a track for the best and brightest American students that would preclude any secular studies.

He claimed that his 16 year old Israeli grandson in Israel (who did not spend any time in secular studies) knew an entire Mesechta (Kesuvos) by heart - including all the Tosphos - adding that this was not so unusual in Israel. He challenged the American system to have produced anything comparable! Fortunately Telzer Rosh Hayeshiva Rabbi A.C. Levine countered that his Yeshiva high school graduates have all taken secular subjects and it has produced many Talmidei Chachamin on par with those being produced in Israel.

The bottom line is that the American Charedi system works. Despite the fact that just like Israel - there is a push towards staying in learning as long as possible (a problem in and of itself if applied to everyone). American Charedim are far more prepared for continuing education if they so choose. This is not the case in Israel – unless they attended Maarava or a school like it. It is rare for someone who has gone through the Charedi educational system to go on to a higher education that would provide a better job and take him out of poverty.

An article in Ynet spells this out in stark detail. 65% of Israeli Charedi men do not work. That is the percentage of Charedim in England and America that do work. In Israel only 9% hold a high school diploma or an academic degree. Compare this to the United States where nearly all Charedi students have high school diplomas. And have the option of going on to college and professional schools.

Professor Amiram Gonen performed a study comparing Israeli Charedim with American and British Charedim. Here is what he said:

I actually proved that a haredi in London can more easily live off of State funds than in Israel, but he doesn't do this. Two thirds of haredi men there work, versus just one third in Israel."
These are all issues I’ve discussed before. But the issue will not go away. And the situation in Israel is only getting worse. The Charedi community is growing exponentially and continues to stridently reject adding any kind of basic secular curriculum to their schools. Any attempt at all by the government to do so is treated as though it were Shmad! – an attempt to steer them away from Torah observance. This despite the fact that Yeshivos have been getting state funding for years contingent on offering a basic secular studies curriculum which is completely ignored.

Shmad?! It isn’t Shmad. It is only an attempt to help this community help themselves.

There are some educators who have put the question to American rabbinic leadership and asked how can Israel say that secular studies should be banned from their educational system while allowing it in America? The answer is always that it is two different worlds with different circumstances. We require what we require and they require what they require. You cannot make comparisons.

But I challenge that attitude. What exactly makes us different? Do we have two Torahs? There is no way to explain the disparity. That’s why - to the best of my knowledge - they haven’t done so.

I would suggest that we are not different. We have only one Torah. Why the disparity? Is it because they do not want to contradict the rabbinic leadership in Israel? I hope not because that is not a reason to avoid standing up for principle. Especially since the system here works pretty well and the system there doesn’t.

I have heard it said by Agudah spokesmen that it is the policy of American rabbinic leaders not to comment on what Israeli rabbinic leaders say. Obviously that isn’t true. The American leadership was quick to publicly jump on board with Israeli leaders when it came to protesting the Israeli government actions in Emanuel. If they can make their real views known on that issue they should make their views known on this issue. Or do they only comment when they agree? That would be an indication that ‘no comment’ means they do not agree.

They cannot say secular studies are OK here and not there. If it’s OK here - it’s OK there. We have only one Torah. Unless they can provide reasons for the disparity it behooves them to pick one system and advocate it for both societies. Secular education may not be for everyone. But certainly geography should not make a difference.
Posted by Harry Maryles at 10:22 AM