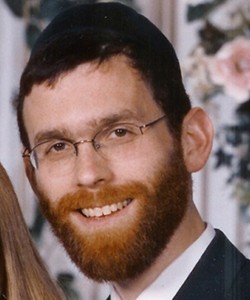 There is a front page essay in last week’s the Jewish Press that is both refreshing and troubling. 40 year old Rabbi Yaakov Rosenblatt (pictured) has touched upon a subject which is a recurrent theme here, Kiddush HaShem. Well not exactly. The theme I write about is the antithesis to this: Chilul HaShem. But one cannot really discuss one side of this coin without thinking about the other.

Rabbi Rosenblatt clearly identifies as Charedi. Although he does not refer to himself that way specifically it is obvious from the context that he is. What is refreshing therefore is that he is calling for a new mission for his community that will be inspiring for the current generation. Just as the mission was for earlier generations was for them.

His point is that every generation since back in the earliest days of the 20th century has had its own focus. Every generation took an ideal in Judaism and raised it to the highest level they could. In the years of his great grandfather it was all about the challenge of remaining observant in a “melting pot”new world hostile to difference.

I am not talking about anti Semitism, but the idea of the American value of assimilating all comers into a singular American identity. So that if there was a work ethic that included working on Shabbos, it was poor form to take that day off for religious reasons. And in many cases it was more than just poor form. Taking Shabbos off was cause for getting fired.

That generation lost many Jews to assimilation. Many Jewish immigrants could not withstand the pressures of Parannsa and opted to work on Shabbos. They felt they had no choice. Many of their children quickly abandoned any semblance of Yiddshkeit. But those like Rabbi Rosenblatt’s great grandfather father persevered and kept their children in the fold.

The next generation had it a little easier as many jobs no longer required working on Shabbos. But Jewsih education in this country was in it’s infancy and many of them went to public school. Their clarion call was raising an observant family by sending them to a day school that was becoming increasingly popular. They had a strong work ethic but placed great value on raising Frum children by sending them to day schools and Yeshivos.

The next generation – which is my own – understood the value of Torah and its primacy in our lives having been educated in Yeshivos. But we also knew the value of Parnassa and attended college so that we could have productive careers. The Kollel was still in its infancy here then but was beginning to pick up speed.

Rabbi Rosenblatt then talks about his own generation:

My generation added something, too. Our yeshiva education was more intense than that of our parents. We learned more, we learned younger, and we learned deeper. Our internal intensity was expressed in the external symbols of large velvet yarmulkes, peyos behind our ears, and a dress code of white shirts and dark pants. Our comfort with our values and focus on learning expressed itself in our speaking “yeshivish,” a language infused with idioms of Torah scholarship and the culture of Lita, something our parents never did. We saw the creation of the haredi press and a trend toward turning to the gedolim of Eretz Yisrael for psak din and social direction. My parents’ generation built Flatbush. We built Lakewood

One can debate the value of those externals. But the fact is that today’s level of Torah learning is unprecedented. More Jews are learning full time than at any time in Jewish history. But it comes with a very high price.

Not all of those who commit to a life of learning Torah are willing to live the life of poverty that often accompanies that commitment. The result of all this is that in far too many cases corners are cut with respect to ethics in business. Credit cards are maxed out. Gemilas Chasdim funds are over borrowed with little chance of repayment. The welfare system is abused - legally and in some cases fraudulently. Ethical corners are cut. There is cheating on taxes.

Blatant fraud has taken place by desperate people trying to provide funds for their institutions since funding by their constituents is becoming less fruitful. As more of them opt for such lifestyles sources for funding are drying up. Some of them have been caught and have gone to jail. The price of this new dedication to Torah learning is the increased incidence of Chilul HaShem. For a while there it seemed like every week there was a new report in the media about an Orthodox Jew being caught for financial fraud.

To be fair, many of those caught in fraud were just plain greedy unethical people who had nothing to do with an impoverished lifestyle. But there were also some very high profile rabbis who were caught doing things like not because of greed, but because they were desperate to fund their institutions.

Rabbi Rosenblatt suggests that the new grand theme for his generation and beyond should be Kiddush HaShem. Here is how he puts it:

Rabbi Rosenblatt is one of the good guys. He sees what’s happening and took a cue from a speech he heard Jonathan Rosenblum make at an Agudah convention 15 years ago and feels that making a Kiddush HaShem should be the new mission of his Charedi world . I could not agree more with him and applaud his courage in making this call.

What is sad is that he has to make it at all. Has his community become so self absorbed that it does not understand such a fundamental component of Judaism? Doesn’t his community understand that their every action is judged by the world? That the eyes of the world are upon them? That the media loves reporting on religious people (of any religion) gone bad? Has their insularity caused them to be blind to how they are being perceived? Not only that but what good is all that learning if one does not understand that the basic Issur of say… cheating on taxes?

Does Torah learning produce these lack of values? The answer of course is no. But if you  don’t know any better - the increase in Chilul HaShem among Orthodox Jewry in recent years might leave you wondering. If you are a secular Jew or non Jew observing this, that is exactly what you might think. What makes it even worse is that the higher up the “religiosity pole” one climbs, the more every negative action is seen and judged by the masses. And the greater the Chilul HaShem.

Instead of doing things that end up being a Chilul HaShem, they should be doing the opposite.

Why does Rabbi Rosenblatt realize this? Perhaps it is because he is not as insulated as his fellow Charedim. He does not live on the East Coast. And he happens to be a rabbi with NCSY in Dallas. He sees the real world and knows the consequences of Chilul HaShem versus Kiddush HaShem.

Although Rabbi Rosenblatt’s Mussar is geared towards his own community, it is good advice for all of us. We all need to think about our every action and ask ourselves whether it will be a Chilul HaShem or a Kiddush HaShem… and proceed only if it is the latter.
Posted by Harry Maryles at 1:33 PM