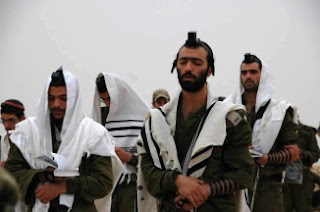 The following guest post by Rabbi Dovid Landesman (which was posted as a lengthy comment in an earlier thread) is an important one. He is a Charedi Rav living in Israel whom I consider to be a role model for all Charedim.  I am in basic agreement with the views he expresses here.

The only caveat being that I don’t agree with his suggestion that there be a united Charedi front in opposition to the draft. I firmly believe that a protest along those lines would be counterproductive – exacerbating  already existing tensions. Especially since there has been a suggestion of violence by at least one Charedi Rav who used the word “bloodshed” in reference to such a protest.


My view as stated earlier is that cooler heads on both sides should prevail. Government and Rabbinic leaders should come up with a workable solution that would be acceptable to both sides whereby Charedim could serve in a religious environment  that  would be completely comfortable for them.

That means that before a single Charedi is drafted the infrastructure must be in place to accommodate all their concerns.  It should include heavy penalties for any officer that tries to circumvent those religious accommodations and unfairly harass Charedi recruits. And if alternative service is an option for Charedim it should be an option for everyone. His words - unedited - follow.

I am perturbed by the tone of many of the reactions to your posting; the parallel to the chareidi triumphalism that I have decried so often is being exposed in the comments that seem to absolutely gloat over the prospect of closing the kollels, making the parasites get jobs and turning the yeshivot into prisons.

I expect that much of this thought comes from the armchair Zionists of North America, who are quick to denigrate the very real contribution that the chareidim of EY - and I consider myself one of them - have made to society here. I am especially tired of critics and "eitzot gebbers" who live in North America and preach to us from afar. Even those who have children who are here [and I write "are here" rather than "live here" because in too many cases they don't really live here] have little right to become involved in an issue whose ramifications are extremely serious. I wonder how much those who so vociferously complain about the kollels actually contribute to those kollels! How many of their children avoid the draft?

What right do I have to speak? I live here, [try] to earn a living here and, along with my sons, have served in the IDF. I would point out that I joined the IDF on the advice of my recently departed rosh yeshiva, who was a bona fide chareidi himself. He taught me that serving has nothing to do with supporting the medinah; if you live in a place you fulfill the obligations incumbent upon you; taxes, military service and contributing to the welfare of society. That said, and off my chest, let me make my point.

The essence of the problem is to somehow facilitate the entry of the chareidi world into Israel. Once that happens, the museum of authentic Judaism [the separatist kehillah created by R. Yosef Chaim Zonnenfeld] will mainstream and "share the burden." The olam ha-Torah is slowly evolving; Netzach Yehudah, the Shachar programs, the michlalot chareidiot, are all making a significant contribution toward this goal.

The Plesner Committee and the "forced" conscription advocates will destory all of this by creating a situation wherein the fanatics will prevail and the retreat into the ghettos will become even more pronounced. Instead of allowing natural forces to create new realities, the present brouhaha will do nothing more than reinforce the walls that separate us from society. When man tampers with the ecology the results are long term damage that no one can foresee.

The worldview of R. Yosef Chaim has become pervasive and has exerted tremendous influence on the olam ha-Torah as a whole. There is a vast difference between the yeshivot today and the yeshivot of recent history - the infamous slide to the right. The yeshivot then were led by roshei yeshivot who all must admit were shoulders above the present leadership and their worldview was far more realistic and accommodating.

Minor examples: Which contemporary  rosh yeshiva would raise an Israeli flag on his yeshiva as a sign of hakarat hatov as did the Ponovezher Rav? Which rosh yeshiva would arrange for ice cream to be served at lunch in celebration of Yom ha-Atzmaut as did R. Yechezkel Sarne in Chevron? The Zionists of those days [Ben Gurion, Chaim Weizman, Ben Tzvi,] were far more anti-religion than the tinokot shenishbu who rule today. Nevertheless, the roshei yeshivot then were far less afraid to confront reality.

I could go on and on [and I have on this blog, on Cross Currents and in my books] but now is not the time. What we - Torah observant Jews across the spectrum - must do is present a unified face toward the political leadership in Israel, pointing out that pressure will be counterproductive and will only lead to a reversal in the little progress that has been made.
Posted by Harry Maryles at 8:22 AM