The Torah is Not in Heaven 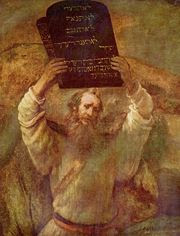 When we recite Dayenu at the Seder we say the following: Even if You (God) would only have brought us to Sinai and not given us the Torah, it would have been enough.

Really? Isn’t Torah what Judaism is all about? The answer is - of course it is. So how would it be enough to bring us to Sinai and not give us the Torah? What would have been the point?

There are many answers given to this question. But my favorite is the one offered by the Aruch HaSulchan in his Haggadah, Leil Shimurim.

There is a famous story in the Gemarah (Bava Metzia 59). It involves a question of Tumah with respect to a certain oven - the Tanur Shel Achnoi. It is about a dispute between R' Yehoshua and R' Eliezer as to whether that oven was Tahor or Tameh. R' Yehoshua Paskined that it was Tahor and he represented the majority opinion. R' Eliezer said it was Tameh and was so sure he was right that he held his ground. But he was losing the battle against the majority, so he called for a Bas Kol. - a direct communication from Heaven expressed in an echo type voice.

He got one. And indeed he was right. God agreed with him. But R' Yehoshua stood his ground as well. He stood up and said, 'We do not listen to a Bas Kol.' 'The Torah is not in Heaven.' We have received it from Heaven and it is here on earth. We have been told the rules of Psak. In this case the rule is Acharei Rabbim L’Hatos. We follow the majority when there is a dispute. R' Eliezer was put into Cherem after that.

This is the meaning of that line in the Dayneu. Even if we were to have been brought to Sinai and given the law via a direct oral transmission from God to us – Nevuah - that would have been enough. How much greater is the gift of Torah that provides us with the ability Paskin Halacha for ourselves.


Taken from Torah L’Daas
Posted by Harry Maryles at 9:44 PM