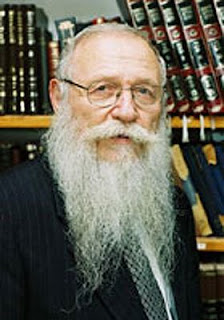 As of now, the conversion situation remains unresolved. In what I believe to be a seminal moment in Jewish history, a Rosh Yeshiva, Talmid Chacham and a Yiras Shamyim was stripped of all respect and dignity by a Charedized Israeli Rabbinate.

This has outraged many people including distinguished Roshei Yeshiva like Rav Aaron Lichtenstein. All because he was trying to do what he believed to be the right thing in a matter crucial to the survival of Israel and the Jewish people.

Rabbi Avraham Sherman - who is a judge on the Israeli Chief Rabbinate - has ruled countless numbers of sincere conversions invalid. As a result these sincere converts have undergone untold suffering and emotional distress. And in that same moment the 75 year old Rosh HaYeshiva of Yeshivat Or Etzion - and head of Bnei Akiva and the Hesder Yeshivos - was villified.

Rabbi Chaim Druckman has been declared by Rabbi Sherman to be unfit as a Judge. All of his conversions since 1999 have been declared invalid.

Many people have come to the defense of Rabbi Sherman, claiming that his Halachic reasoning is sound. They say he raised very serious charges about Rabbi Druckman’s conversions. I have no quarrel with his views. What troubles me is the villification of a man without giving him his day in court. And the inability to be Dan L’Kaf Zechus allowing Rav Druckman’s reputation to remain intact and his past conversions to stand.

Many have countered that he was given an opportunity to defend himself but that he declined. They cite that as an indication of guilt - or lack of defense. I see it as Rabbi Druckman attempting to avoid a kangaroo court that has been stuffed with Charedi Rabbis.

Charedi supporters of Rabbi Sherman claim this ruling was made to preserve the Halachic purity of how a Jew is defined. I’m sure that’s true. But I am unconvinced that this is the sole reason. And it certainly does not mean they can so egregiously attack another Talmid Chacham who has a sound Halachic basis for what he did.

Here is a good explanation of it. Although I am not supportive of the individual who makes the argument - I find his reasoning in this instance to be a rational counter to Rabbi Sherman's ruling based on classic and accepted sources. It is on that basis that I pubilsh it. He begins by citing the key source of Rabbi Sherman’s ruling:

Rabbi Yitzhak Schmelkes penned a revolutionary responsum in 1876: “A person who converts and accepts the yoke of the mitzvot but does not intend in his heart to observe them – God desires the heart, and he is not a convert”. This approach has no precedent in 2,000 years of halakhic discussions about conversion. Indeed, Rabbi Schmelkes was aware that his ruling contradicts the well-known halachic principal that “devarim shebalev einam devarim” (things of the heart are not things).

The second source for the haredi position is a passage in Bekhorot 30b: “Our Sages taught: …if an idol worshipper came to accept (lekabel) the Torah except for one thing, we do not accept him. R. Yossi b”r Yehudah says: even if the exception be one of the minutiae of the Scribes (i.e. the Sages)”. The major medieval codes of Jewish law such as Maimonides, the Tur and the Shulhan Arukh ignored this passage. It was revived by 19th-20th century rabbis who wanted to reject most converts.

Thus, for example, Rabbi Moshe Feinstein repeatedly states in his response that a convert must accept all of the mitzvot: “… and without accepting mitzvot, even one detail, behold it is written in Bekhorot 30 that we do not accept him…”

The normative position, however, is found in another passage in the Talmud – Yevamot 47a-b. If a person comes to convert, you ask him if he knows that the Jewish people is “persecuted and oppressed. If he replies ‘I know and yet am unworthy’ he is accepted forthwith, and is given instruction in some of the minor and some of the major commandments - He is also told of the punishment for the transgression of the commandments... And… he is informed of the reward granted for their fulfillment… He is not, however, to be persuaded or dissuaded too much. Kibel (if he accepted/consented), he is circumcised forthwith… (Afterwards, when he is immersed) two learned men must stand by his side and instruct him in some of the minor commandments and in some of the major ones. When he comes up after his immersion, he is deemed to be an Israelite in all respects…”

This baraita, from the second century or earlier, was quoted or paraphrased by Maimonides, the Tur and the Shulhan Arukh.

The key phrase is “kibel” – if he accepted/consented. This obviously does not refer to acceptance of all the mitzvot because he has only been instructed in some of the minor and some of the major mitzvot! So what does it mean?

Rabbi Ouziel (1880-1953), first Sephardic Chief Rabbi of the State of Israel, explained as follows: “It is clear from (Yevamot 47a-b) that we do not demand of him to observe the mitzvot and it is also not necessary that the Bet Din know that he will observe them, for if not, no converts will be accepted in Israel, for who will guarantee that this gentile will be loyal to all the mitzvot in the Torah! Rather, they instruct him in some of the mitzvot so that if he wants he should go away and so that he cannot say later ‘if I had known I would not have converted’. And this is before the fact, but after the fact - if they did not instruct him, it is not indispensable… (It) is permissible and a mitzvah to accept converts even though we know that they will not observe all the mitzvot because in the end they will observe them...”

Thus the entire “house of cards” built by Rabbi Sherman rests on just one card: that all poskim agree that all converts must accept all mitzvot. Indeed, this is the position of most Ashkenazic Haredi rabbis since the year 1876. But it is not normative Jewish law. Normative Jewish law for 2,000 years has followed Yevamot that a convert accepts the halakhic system and its rewards and punishments, not all of the mitzvot which he has yet to learn.

One can disagree. One can say that they want to accept a higher standard for the future. But to disqualify those who have already been converted using the aforementioned reasoning and besmirching a Zaken and Talmid Chacham - a man who has devoted his life to Klal Yisroel - is a Chilul HaShem.
Posted by Harry Maryles at 10:56 AM