Are All Lubavitchers Messianic? 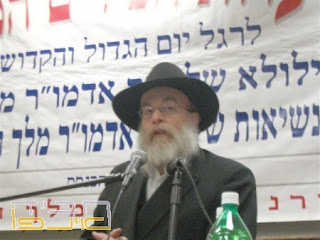 It is with a heavy heart that I write these words. I am very close with many Lubavitchers. I count many of them among some of my closest friends. I Daven with them every single day. They are some of the finest and kindest people I know. I am therefore loathe to criticize them. So when the video below came out, I refused to write about it. I saw – and perhaps still see – it as an aberration. There seems to be nothing new here. Mentioning it just opens up a can of worms. Nothing is gained.

But in light of some new information I am compelled to do so. The video below shows of a few Lubavitcher Meshichsts who decided that they would celebrate the Rebbe’s Messiahship by having a feast – on the fast day of Asarah B’ Teves. The location was in Melbourne, Australia in what looked like someone’s backyard. A festive table was set – in the style of a backyard picnic. The master of ceremonies gets up and proclaims something to the effect that all fast days will turn into feast days during Moshiach’s times. He proclaims that Moshaich has indeed arrived in the person of the Lubavitcher Rebbe. And then he proceeded to make the blessing over wine and a Shehechiyanu. He drinks the wine and a party ensued – on Asarah B’Teves, a fast day. This video has already been seen by thousands of people

I’m sure I know what most mainstream Lubavitchers are saying about this. They write this group off as mentally unstable - whose overly intense love of the Rebbe has caused them to cross the line from sanity to insanity. They indeed consider this type of thing to be a major embarrassment. Which of course it is.

But what are their true beliefs about this matter? I have always maintained that even the most rabid anti-Meshichists in Lubavitch harbor some form of belief in his messiahship. Whether it is in the most extreme form as an incarnation of God on earth ( a minuscule number) all the way to the idea that it is at least possible that he will one day resurrected to fulfill his mission on earth and then proclaimed to be Moshiach ( the majority).

I in fact posted a letter from a Lubavitcher father to his son who was clearly an anti Meshichist a while back. This letter quoted verbatim all the arguments against the idea that the Rebbe (who he fully acknowledged had passed away) was - or could even become Moshiach. So opposed was he. I originally thought it was a breakthrough. But after further examination even he allowed for a possible resurrection and completion of task to be proclaimed Moshiach.

I am afraid that this is still the case. Mainstream Lubavitch has done a pretty good job of ridding itself of the image as being Meshichists. Except for a few isolated but significant pockets in Crown Heights and Israel, they do not portray themselves that way. Mainstream Lubavitch now concentrates on what they have always done best – making Lubavitchers out of secular Jews.

In the process of widening their net of Kiruv, their numbers are greater than ever.Their locations around the world - more numerous. Exceeding even what existed during the lifetime of the Rebbe. They have emissaries all over the world in some of the most far flung places – wherever there is a Jew anywhere in the world one is likely to find a Chabad house nearby. In fact it is the nature of such dedication that makes it so hard for them to shake the feeling that somehow – some way the Rebbe will come back to lead them – and soon! …with the final redemption as the Rebbe had promised.

As if to emphasize the fact that mainstream Lubavitch is not Meshchist - they reject any public utterances or displays that Rebbe is Moshiach. To that extent a Lubavitcher Rav, Zvi Hirsch Telsner - who is head of Melbourne’s Yeshiva Centre in Australia - has come out with a virtual excommunication of those who participated in that ‘picnic on a fast day’. It can be found on YWN. His words were extremely harsh. Here in part is what he said:

I find it necessary to rule that until the perpetrators of these deeds stand before a Beis Din of three Rabbonim, and seek forgiveness and correction of that which they have done, they are to be ostracized by all members of the community. They cannot be counted as part of a minyan (for davening) or mezuman (for bentsching), and one may not answer Amen after their Brochos. They cannot be given a Aliyah to the Torah or honoured with any other Mitzvah (see Shulchan Oruch, Yoreh Deah Ch. 334 Para 2). Similarly, one should not speak to them or have any business dealings with them.

His letter is typical of the harsh rhetoric reserved for Meshichists. The image of mainstream Lubavitch suffers greatly when Meshichist do things like that. They hate it and they go to great lengths to rid themselves of this image. They have even gone to court to wrest control of any building or institution their overt Meshchists have commandeered.

But is Rabbi Telsner really opposed to the idea of the Rebbe as the Messiah? I doubt it. Back in about 2004 he signed a document entitled Psak Din. It is available for view in pdf. His name is in the middle of the 2nd line.

This is a document unequivocally declares as Halacha, that the Rebbe is Moshiach. Not was. Not will be. But is! …even though he had long ago died as of he date of that document. Lest anyone think this is a forgery see the photo above. That is Rabbi Telsner speaking in front of a banner obviously proclaiming the Rebbe as the King -Moshiach. (Note the word Melech in the banner behind him.)

A belief that a man who died will have a second coming to fulfill his task on earth and become the messiah - is anathema to Judaism.

I think this episode speaks for itself. Even the most anti Meshichists in Lubavitch – are in some way shape or form… Meshichist. They have yet to prove otherwise. All the denial – and all the Cherems in the world are not enough. They have to go the extra mile and just say these exact words:
The Rebbe was not, is not, and never will be Moshiach.

Until those words are uttered by their leaders, their views are suspect.