Can It Be? A Resurrected Messiah in Judaism? 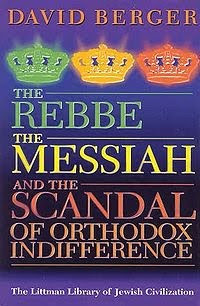 I am honored once again to present a guest post by Dr. David Berger. He heads the Jewish Studies department, is the Dean of the Bernard Revel Graduate School of Yeshiva University and a leader in the fight against Lubavitch Messianism.

Athough there have been many excellent books and essays written about it, Dr. Berger’s monumental work, The Rebbe, the Messiah, and the Scandal of Orthodox Indifference, (pictured) stands alone as the definitive rebuttal to claims by Lubavitch Messianists that their Rebbe - who passed away in 1994 - is nonetheless the Messiah. Or at least will somehow become the Messiah after his resurrection.

Dr. Berger’s stance is supported by many rabbinic leaders across the entire spectrum of Orthodoxy. Some do so openly and some do so clandestinely. But few are willing to do more than figuratively pat him on the back and quietly cheer him on. I suppose they have their reasons. But as the title of his book suggests I think it is a scandal. Allowing this to fester is bad for all of Klal Yisroel - and that includes Lubavitch whether they realize it or not.

Here now are his words.

The latest exchange on this blog regarding Lubavitch messianism impels me to provide a brief summary of the issue of the Rebbe’s Messiahship as I see it.

Appendix I of my book provides twelve sources that deny the possibility of an interrupted messianic mission, and in the new introduction to the paperback edition I added two more. (This list is by no means exhaustive.) Gil Student’s book on the subject cited and discussed a substantial selection of these sources and added a passage from a sichah of the Rebbe as well as the Rambam’s assertion that the Messiah will first appear in the Land of Israel.

After the Rebbe passed away in 1994, believers began to scour the sources for evidence legitimating belief in a deceased Messiah. The most important source is in Sanhedrin 98b, which according to one interpretation speaks of the possibility of a Messiah from the dead.

Before proceeding, let me note that the Rambam’s affirmation that a messianic candidate who does not succeed in his lifetime is known not to be the one whom the Torah promised is utterly clear and unequivocal, and so anyone who asserts (as some commenters and one distinguished Lubavitch non-messianist have) that denying the possibility that the Rebbe is the Messiah is a heretical limiting of God’s powers declares the Rambam a heretic.

Since the Rebbe declared the Rambam’s discussion of the Messiah in the Mishneh Torah to be binding, every Lubavitch hasid should feel obligated to deny the possibility that the Rebbe will be the Messiah. (The arguments that belief in the Rebbe’s Messiahship is consistent with the Rambam are unworthy of any serious attention.) Setting this aside, and without going into detail, let me summarize my view of the sources:

1. Some Jews believed that the messianic promise is that King David will return as the Messiah. It is abundantly clear from the liturgy (with one exception) and from a mountain of other evidence that the vast majority of Jews, who spoke of Messiah son of David, did not believe this.

2. Hardly any Jews maintained that the descendant of David sent to redeem Israel might, let alone would, return from the dead. The Rambam, as we have seen, ruled this out in principle in a highly authoritative work. I know of no direct, explicit critique of his assertion anywhere. Polemical and non-polemical texts insist on this position as a defining element of Judaism.

3. No Jews at all believed that a descendant of David will initiate a messianic mission in which he would promise imminent redemption, which the Rebbe certainly did, and then die in an unredeemed world. Messiah son of David does not fail in his first attempt.

None of the tiny number of sources cited by believers in the Rebbe’s Messiahship to validate the possibility of a Messiah from the dead contains even a whisper of an indication that such a scenario is possible. Failed messianic candidates almost always provided, as the Rebbe did, assurances of imminent redemption that turned out to be incorrect.

That Messiah son of David, whatever his good intentions, would effectively mislead the Jewish people about the time of the redemption is an absurd prospect that would have been manifestly unthinkable for all Jews through the ages.

4. In sum, even the possibility that the Lubavitcher Rebbe could be the Messiah is inconsistent with the classic messianic faith of Judaism. Lubavitch messianism goes beyond this to affirm with certainty that he is in fact the Messiah. This position abolishes Judaism’s criteria for identifying the Messiah even more ruthlessly.

In effect, Judaism’s central criterion for identifying the Messiah has been transformed from ushering in a redeemed world to providing incorrect assurances about the redemption.

In other words, we can be certain that a Rabbi of stature is the Messiah if he tells us repeatedly that the redemption will come in his generation and this assertion then turns out to be incorrect. This sounds like a parody, but it is not. The fact that one non-trivial strain of this movement goes further by attributing literal divinity to the Rebbe makes an already Christian-style belief all the more alien to historic Judaism.
Posted by Harry Maryles at 8:36 AM