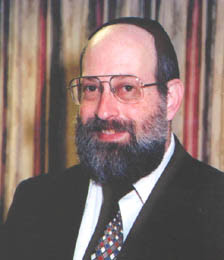 A lot of people – even Orthodox ones – are upset at Rabbi Avi Shafran. He has certainly taken his lumps on various issues. In my view unfairly so. The latest volley against him comes in the form of wholesale vicious attacks by various bloggers on the subject of the Haitian earthquake. Rabbi Shafran wrote a post about it upon which I commented here.

The perception by them is that he blamed bloggers and other media who write Lashon Hora or ‘evil speech’ for the Haitian earthquake.

I don’t think he really did that. What he did is ask for a little introspection at a time like this and pointed to ‘evil speech’ as a focal point. He gave a few examples of it on the internet, referenced traditional sources, and quoted contemporary rabbinic leaders in support of doing that.

As I indicated in my previous post - I disagreed with him. Not to say that we shouldn’t be introspective on the very issues he talked about, but because of his omission of a bit of self reflection on the part of those for whom he writes.

I reasoned that if Lashon Hara on our part is what aroused God’s anger then perhaps so too may God have been angered by how some of the larger problems in the Jewish world were dealt with by his employers, the Agudah Moetzes. I need not go into a litany of those. We all know what they are.

But the bottom line is that he was not necessarily wrong in asking for introspection by Jews in one area. It was however my view that he erred in omitting that introspection was also needed by members of his own circle as well in areas that are perhaps of greater concern.

He was not really blaming bloggers – even anti Frum ones – for the earthquake in Haiti. He was just saying that as Jews we should try and see what message there is for us as God’s chosen people. What can we do to improve ourselves.

To be fair, it would really be inappropriate for Rabbi Shafran to criticize his employers - especially since he believes in the Agudah motto that one must heed them. And that even if we agree, we must defer to their judgment since via their greatness in Torah knowledge they most closely express the Torah’s Daas.

Based on this alone how could he possibly criticize them?

So I do not really fault him here. My criticism is really aimed not at him personally but at the very Hashkafa of Bitul Daas to the Gedolim of the Agudah Moetzes. That confers defacto – if not dejure infallibility to them. As I have said many times - I do not agree that the final word of Torah necessarily lies with the Agudah Moetzes.

That said, Rabbi Shafran has made some serious mistakes. I’m sure he would be the first to admit that. The most notorious one being that article praising Bernie Madoff for apologizing to his investors for stealing 50 billion of their dollars and minimizing Capatin Sully Sullenberger’s heroic skills in flying and landing a disabled aircraft safely in the Hudson River and seeing to it that his passengers remained safe until they were fully rescued.

Even there he was trying to make a point about the importance of Teshuva but as he later admitted, he made it very badly if at all and pulled the whole post.

There were other issues with which I had serious disagreement. Such as his opposition to the Markey Bill - prposed New York State legislation that would have granted a onetime extension of the statute of limitations for victims of sex abused to sue their abusers and enablers. The views of the Agudah Moetzes which he defended were not unreasonable. I strongly disagreed with him but I never questioned his integrity or accused him of evil intent. We each had good reasons for our respective positions.

At the end of the day, I respect Rabbi Shafran’s views even when I disagree with him. He is a brilliant writer and does a great job expressing the Agudah viewpoint. I truly believe he is an honorable man and 100% sincere in his beliefs. I think he expresses them clearly in all of his writings. Furthermore I actually agree with him most of the time. That is a function of the Orthodoxy to which we both belong.
Posted by Harry Maryles at 11:44 AM