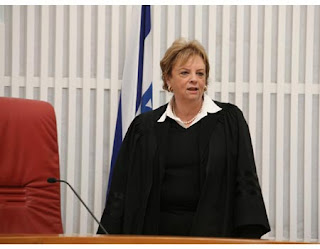 Astonishing! That is the only word I can think of that most accurately reflects my reaction to a post on Matzav.com.

Well… it isn’t even so much the post that bothered me. It was after all only a cut and paste form Ynet. It was the comments that upset me. And even more so - the fact that Matzav allowed them.

There was an incident during a Supreme Court session in Israel today. Apparently a madman by the name of Pini Cohen managed to enter the court remove his shoes and throw them violently at Supreme Court President Dorit Beinish (pictured) hitting her in the face, knocking her down, and breaking her glasses while shouting, “You’re corrupt, you’ve ruined our lives. You’ll be corrupt your entire life.’”

Mr. Cohen was quickly removed from the court.

One can have his differences with the Israeli court system. But one may not resolve differences by throwing objects at the judges. Any normal person would easily understand that and condemn what he did.

But not Matzav’s readers. And apparently not Matzav’s publishers either. The comments section is fully moderated like this one. Those comments were read and approved. How sick is it when a Charedi website publishes accolades for this violent criminal from its readership! Here is the very first comment of eight (as of this writing) – all of which so far have similar sentiments:

It’s not Pini who should be removed from the court but the self-appointed judge Beinish who thinks she’s above the law and has the chutzpah to run the country behind the scenes. Israel must get rid of this evil witch as soon as possible. She’s becoming a bigger terror by the day and a danger to Israel’s existence.

Whenever I brought up the violence in Meah Shearim, I got bombarded with comments about how those are just hooligans and that vast majority of Charedim are opposed to them.