A Bar Mitzvah at the Kotel 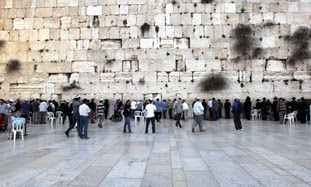 The following are some of my thoughts on the recent ‘Bar Mitzvah’ of Zach Emanuel at the Kotel.

I put the words Bar Mitzvah in quotes because I am not sure he qualified. I am told that his father Rahm Emanuel married a woman who was ‘converted’ to Judaism by the Conservative movement. Orthodoxy does not recognize these conversions.

It is not my purpose here to discuss the reasons for that. Been there and done that. But it should be noted that if as I suspect his mother's conversion is not recoginzed by Orthodoxy - Zach Emanuel is not a Jew. By Orthodox standards his mother is considered a gentile and therefore Zach was not born of a Jewish mother. There is no debate about this in any segment of Orthodoxy.

It saddens me to point this out and I say it with no malice towards the Emanuel family – even though such commentary might hurt them. But facts are facts – hurtful or not.

To the extent that it is hurtful to the Emanuel family shows how strongly they feel about their Judaism. At the same it time shows the tragedy of heterodox movements. It is they who divide Klal Yisroel. Performing conversions which are not wholly accepted does not expand Judaism. It undermines it.

How can anyone think of themselves as fully Jewish if a major segment within it rejects their validity as a Jew? Shouldn’t that be enough to seek a conversion that is universally accepted? I realize of course that this attitude favors only Orthodox conversions. Unlike the conversions of other denominations - they are universally accepted. But again – these are the facts. Fair or not. And their rabbis recognize those facts.

It is nonetheless important to note that the Emanuel family cares about their Judaism. That is obvious. Rahm Emanuel cared enough to assure that his wife ‘converted’. He cared enough to raise his son in a manner that actually had Jewish content. And he cared enough to have that Bar Mitzvah in Israel at the Kotel (Robinson’s Arch). An op-ed in the Jerusalem Post describes the ceremony where Zach actually did Kriyas HaTorah.

As an aside - how sad it is that a non Jew can read from the Torah so well at age 13 when there are so many assimilated Jews who don’t even know the Hebrew alphabet.

Mr. Emanuel went to the Kotel – a disputed West bank area. His boss - the President of the United States – insists it be treated that way - as disputed land not belonging to either Israelis or Palestinians. One would think that the Kotel would therefore be off limits (at least officially) to any member of the administration - let alone the President’s Chief of Staff, Rahm Emanuel - the second most powerful man in the world. According to many pundits the President’s Chief of Staff is considered to have that kind of influence and therefore that kind of power. That might be somewhat of an exaggeration. But not by much.

And yet he went there as if to say his religion was more important than his boss’s policies.

In many ways this event is a tragedy. I feel sorry for a man who so strongly felt a need to connect with God for his son’s Bar Mitzvah that he defied - in spirit – his boss’s policies about the West Bank. And the fact is that his son is not a Bar Mitzvah at all. He never will be unless he gets a Halachic conversion. I would encourage him to do that. Let Zach convert in an Orthodox Beis Din so that he will become Bar Mitzvah in a literal sense.

This will not be the first time that this happens. It happens all the time in NCSY. Young people from non observant homes with last names like Goldstein and Schwartz become involved in NCSY. They become inspired and start observing Mitzvos. In the course of time it is discovered that their mothers are not Jewish. Either they never converted at all – or have been converted by a Reform or Conservative rabbi. When that happens the child is told the truth and advised that they do not have to be Jewish. If they insist and want to continue on their spiritual path, they are warmly embraced and eventually converted by an Orthodox Beis Din.

It would be a shame to lose a young man who was motivated and worked hard preparing for his Bar Mitzvah enough to have Lained from his Parsha. He believes he is a Jew. He needs to be exposed to Orthodoxy. Perhaps he should be encouraged go to NCSY where he too can become inspired and convert.

Veering off to an entirely different point - what does all this mean for US foreign policy? What does it mean to know that the President’s man has an emotional attachment to Eretz Yisroel? I believe that is a good thing.

I am not among those who think the President is some sort of anti Semite. On the contrary. I believe his Middle East policies are well intentioned – even if they are completely wrong and probably even dangerous. He wants peace and he thinks this new turn toward the Palestinians – emphasizing their plight and expressing a new ‘even-handedness’ will bring peace about. In my view he is extremely naïve about this. But that is all it is. Innocent - but dangerous naiveté. That one of the President's closest confidants has such an emotional connection to Israel can only be good.

One final point. The Op-ed was written by a Yizhar Hess - executive director and CEO of the Masorti Movement in Israel. Even though I completely disagree with his perspective on Judaism and the non Halachic (mixed seating, etc.) way the Bar Mitzvah was conducted - his description of the Bar Mitzvah is quite moving and that ought to be noted.
Posted by Harry Maryles at 10:00 AM