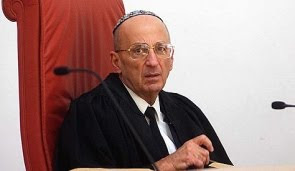 Emmanuel parents who do not inform the Israeli High Court of Justice in writing by today that they will follow the court’s non-democratic order to return their daughters to the Beit Yaakov school there will be imprisoned for two weeks beginning tomorrow, Justices Edmond Levy (pictured), Edna Arbel and Chanan Meltzer ruled late yesterday…

These words are the opening paragraph in a Matzav.com article.

There has been much contentious debate about this issue in the media. It deals with the question of whether this is indeed an issue of racioal prejudice or of insiting on religious standards. Charedi partisans have generally taken the approach that the Zionist anti Religious Supreme Court is doing what they are accused of always doing – attacking The Torah. This court decision was yet another opportunity to do that.

The facts of this case are as of yet not entirely clear. But after considering both sides of the argument and experiencing the racist comments about Sephardim from many Charedim in Israel about Sephardim… and noting that one of the justices in the case is an Orthodox Jew – I strongly am led to believe that this entire episode is - from start to finish - nothing more than racism at its worst. The racist Jews in this case are Charedim and they are being led by the Slonimer Rebbe, Rav Shlomo Berezovsky.

I am sickened by this attitude. Of course they are crying foul here and denying that racism has anything to do with it. They are putting their best foot forward – their ‘Chazir Feesil’ - and claiming this is a religious issue… That it isn’t about racist attitudes but about religious standards that these particular Sephardi students do not adhere to. If you believe that… well I’ve got 2 words for you: Brooklyn Bridge! (Would you like to buy it from me?)

In any case Rabbi Mordechai Finkel whose quiet work with OTD young people is a model of dedication and Mesiras Nefesh to the real values of Torah has weighed in on this issue. He has written a guest post. With some very minor edits - it follows in full.

Many readers may be unaware about the saga of the Bais Yaakov of Emmanuel. The Bais Yaakov in town has an exclusive acceptance policy. Wherein, only children who are like them are allowed in. Therefore, children from Sephardi backgrounds need not apply because according to the school, they simply don’t stack up.

Recently, a Sephardi father attempted to enroll his daughter into the Bais Yaakov. His Jewish daughter was denied a spot based on the discriminatory policy. He requested a Din Torah, but the Bais Yaakov refused to attend. He had no choice but appeal to the legal authorities. The Supreme Court ruled a few weeks ago that the discrimination is abominable and the girl must be integrated into the school and not be kept segregated.

The school’s parents staged a two week boycott of school in a cynical way of avoiding giving a Jewish child her right for a Jewish education. The Supreme Court ruled that the school and parents were in contempt of court and gave until 4 Tammuz, June 16 to comply, or go to jail.

The ‘pious’ parents and school found Daas Torah to rubberstamp their policy as being in line with ‘Torah true’ Judaism. The loving families have posted Wanted signs throughout the neighborhood to further foment the hatred of the family who dared challenge the status quo.

A reader in America might shrug his shoulder and say this story is of no interest to them.

It’s time to reconsider this approach.

The Bais Yaakov of Emmanuel’s stance if not vigorously opposed can gain traction throughout the world of ‘Torah true’ schools worldwide. Their actions smack of the type of racsim where only those of the master race deserve their God given rights.

This is a runaway train which picks up steam and recklessly destroys everything in its path. If the schools adopt this policy, what stops them from creating a new policy in two years wherein any family who has a child that went off the derech, has a disability, or has too short a nose doesn’t deserve a Jewish school.

Secondly, don’t be fooled for a minute with the belief that the school’s approach was following ‘Daas Torah’. A lawyer once commented, “You can indict a ham sandwich”. Figure out what you want and you paint a bull’s eye around it. When a school has their mind made up they then present a one-sided case to sympathetic rabbis who are touted as ‘Daas Torah’. The more spineless of them refuse to name who the ‘Daas Torah’ is, much like the Wizard of Oz.

These same anonymous figures can be behind new policies made against you and your family.

It is time to fight against the notion that Torah is an exclusive man given privilege instead of a God given right to all Jews.
Posted by Harry Maryles at 11:59 AM