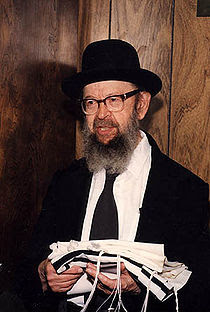 Rabbi Avigdor Miller was truly an enigmatic individual. He attended public school through high school. His first Yeshiva was Yeshiva University after which he went to Europe to learn in the Slabodka Yeshiva for a period of four years. He later he became the Mashgiach of Yeshivas Rebbenu Chaim Berlin. He was a very popular figure in life who inspired many devoted followers. His lectures had always ‘packed the house’! He has become an icon to some since his death.

His views have both angered me and pleased me. What angered me was his approach to evolution. I remember encountering his book on the subject called ‘Rejoice O’ Youth’. He proceeded to argue about the virtual impossibility that evolution could ever have happened.

I had just learned the Theory of Evolution from an Orthodox scientist who was my zoology professor at Roosevelt University. When the Frum kids in that class approached him after one of his lectures on the subject – asking him if he really believed in what he was teaching, he answered without any hesitation, ‘Of course I do …and it does not contradict anything in the Torah’.

He was right of course. One can quibble about various details but there is little doubt in my mind that evolution has taken place - and is taking place. Although some of Darwin’s theories about the origin of species might contradict Jewish theology, evolution itself does not. I believe we are all evolving along the lines Darwin suggests. Evolution does not contradict God’s existence nor His active creation of the universe.

That said, I also understand those with Emunah Peshuta who dismiss evolution. Their belief is valid. They simply choose to ignore all theories and simply… believe. But Rabbi Miller was not satisfied with this. He dismissed evolution as both anti Torah and impossible.

That is what was so upsetting about him for me. He was not speaking to the masses of Yeshiva students that would never go to college and simply believe. He was speaking to the masses of college bound youth who would encounter this theory in the classroom. Instead of trying to reconcile evolution with the Torah as did my college professor - he just dismissed it as an impermissible belief. That kind of absolutism could have easily turned a lot of Frum college kids away from God rather than towards Him.

It is with all of this in mind that I found a letter to the editor in Hamodia by Professor Yitzchak Levine quite curious. The letter was in response to a ‘miracle’ story that has been making the rounds. Here is an excerpt from the letter:

…based on a conversation I had many years ago with Harav Avigdor Miller, zt”l. Whenever I would (tell) him a “miracle” story, he would dismiss it with a wave of his hand and say, “We are not mechuyav to believe such stories.” I once asked him why he invariably responded this way; he replied, “Our emunah is strained enough by what we are required to believe. To add to this is not wise”.

This statement deserves some analysis. Was Rabbi Miller’s Emunah strained? Did he have some doubts about his beliefs? Could it be that his book ‘Rejoice, O’ Youth’ was a response to his own questions and doubts?

He obviously felt the way I do about miracle stories – which is one of the things that pleases me about him: ‘Don’t believe them’. These are the kinds of stories certain Tzedaka organizations have been using with increasing frequency in order to extract funds from desperate people.

They will offer a ‘miracle cure’ for whatever ails you via some hocus pocus obscure Segula they found. They will cite one miracle story after another about how this Segula ‘saved’ someone. The Segula always invloves sending them some money. So people with fertility problems… or various diseases… or child behavior problems or - you name it - send them the requisite amount hoping for the same results. I recall one story they published about a guy who got out of being prosecuted for a financial crime via ‘buying’ one of their Segulos!

I have in the past expressed my deep objections to these kinds of fundraising tactics. They are misleading and the prey on people’s fears and serious problems. I think that if Rabbi Miller were still alive he would be just as upset with these tactics as I am.

But that isn’t my issue here. My issue is Rabbi Miller’s skeptical approach to Emunah while at the same time declaring evolution to be an impermissible belief.

All of this is what makes him an enigma to me.

In the final analysis - this is truly an amazing fact about someone as pious as Rav Avigdor Miller. I would have thought he would never express the reality of struggling with belief. On the other hand, maybe that’s why he wrote the book. Maybe he was trying to convince himself.
Posted by Harry Maryles at 10:00 AM