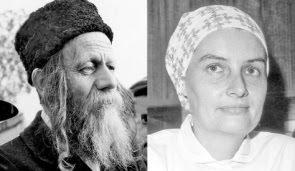 Hutzpedicke, schmutzedicke giyoret - a brazen dirty convert. This is the epithet given to a righteous convert by members of the Edah HaCharedis. Not yesterday but over 45 years ago. It was directed at Ruth Ben David (pictured) who was born a Catholic, worked in the French Resistance during the holocaust, and later took a strong interest in Judaism - finally converting in 1952 after divorcing her first husband.

This is yet another reason to treat the Edah HaCharedis with great contempt. That they can say this about a righteous convert convinces me that they do not deserve even a modicum of respect. In fact I question the very Jewishness of the soul of anyone who can say things like that.

But that isn’t the only reason o treat them this way. The following is a partial list of their activities in recent years. .

It was pointed out to me by a freind who is a Charedi Rav that much of the Edah’s focus is on issues dealing Erva (sex). Through their surrogates and sympathizers they have torched a store that sold clothing that did not meet their Tznius standards. They have thrown rocks at female passersby who do not dress according to their standards. They have spilled acid on a female jogger in Beitar. They have beat up a religious Zionist teenage girl in Ramat Bet Shemesh. They have beat up a woman they saw speaking with a man in public. And they have bullied and hit women seated in the men’s section of a gender segregated bus.

It is my freind's contetntion that not only is the Edah obsessed with sex - Neturei Karta’s founder Rabbi Amram Blau (pictured) was too!

The woman they called a dirty convert was Ruth Ben David, the second wife of Rabbi Blau. He was the grand daddy of Israel haters. The Edah HaCharedis was Neturei Karta’s governing religious body during his era. Although they have since severed their relationship with Neturei Karta - the Edah’s obsession with sex has not gone away.

Ha’aretz has published a story about an upcoming biography of Rabbi Amarm Blau. The biographer has delayed completion of the book because he does not know how to handle this taudry episode in Rabbi Blau’s life.

Briefly here is what happened. The Edah had some sort of rule preventing Rabi Blau cfrom marrying a convert. (This is in fact a disgusting rule on their part which has nothing to do with Halacha.) But when at age 70 Rabbi Blau’s first wife died he was somehow ‘set up’ by a Shadchan with 44 year old female convert Ruth Ben David. And as my Charedi friend put it - this was before his first wife’s body was cold in the grave . The Edah didn’t like that at all. Long story short the Edah fought him and ended up throwing out and putting him into exile.

One might say ‘a plague on both their houses’. I am inclined to agree with the sentiment that both Rabbi Blau and his Edah are condemnable.

It might surprise people to know that these are not my sentiments alone but are a paraphrase of what a Charedi Rav told me. Had I said these things alone - I would be accused of Charedi bashing. Understandably so. But when a Charedi Rav says it – it is an entirely different story. It cannot be dismissed as Charedi bashing. Those who continue to defend the Edah HaCharedis – in my view do so only because they see them as a more right wing version of themselves.

I suggest that this kind of thinking be banished from anyone's minds and replaced with the thoughts of a respected Charedi Rav whose wisdom on various issues in Judaism has gained him much respect by his peers. For obvious reasons I cannot reveal his identity. Don’t try guessing. It is probably not who you think it is. Most of you would be very surprised at his identity.

I have suggested a boycott of products with the Edah Hechsher. My Charedi friend actually sympathizes with this and told me that he personally does not use any Edah backed products.

Lest anyone think this post is just another anti Charedi rant by a typical Charedi basher - think again. If you are Charedi - consider the tremndous amount of Chilul HaShem they are responsible for, their obsession with sex, the sentiments of a respected Charedi Rav and the title of this post!

The Edah may be a force with insurmountable power but they deserve to be exposed for who they really are to the entire world! They are a disgrace to Judaism and should be boycotted in every way possible. Even if it doesn’t succeed – it is nevertheless the right thing to do.
Posted by Harry Maryles at 11:34 AM