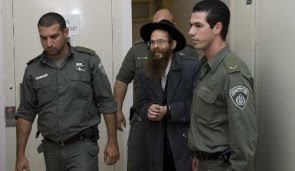 Rav Yitzhak Shapira, Rosh HaYeshiva of Od Yosef Hai was arrested yesterday for writing a book that describes when it is permissible to kill non Jews. It is entitled ‘The King’s Torah’. But based on the description in Ha’aretz it sounds like it should be called ‘Murder K’Hilchasa’ – Murder in Accordance with Jewish Law.

I don’t think he should have been arrested for that. Free speech is the hallmark of any democracy. But I do think he’s playing with fire by writing things like that. I consider it to be highly irresponsible and frankly an embarrassment!

What exactly does he think he accomplishes? …even assuming he’s technically right which I do not necessarily concede. Granted there are situations when killing another human being is justified. Such as in self defense or in preventing a murder. Aside from being the Halacha that is also common sense.

But this not about that. It is specifically about killing non Jews. What he does by teaching these laws is that he provides cover for murderers like Baruch Goldstein who mass murdered Arab worshippers in Ma’aras HaMachpela. Does he think that was a good idea? Is he a fan of Baruch Goldstein’s?

I don’t think it matters if in theory he would deny that his rulings would apply to Goldstein - unless he said so specifically in his book. Goldstein’s supporters would certainly use this book to justify it.

And it further justifies turning Baruch Goldstein into a martyr instead of the mass murderer he was (although I’m told Goldstein was otherwise a nice guy. Of course Ted Bundy was a nice guy too when he wasn’t serially killing college coeds.)

There is also the possibility that some misguided settler zealots will use this as justification to attack nearby Arab villages on the West Bank because they are perceived as threat to the settlements. If some Arabs are killed in the process - so what? Rav Shapira said it was permitted!

Doesn’t Rav Shaipra realize what could result from books like this? Is it that he doesn’t care? Or is he actually advocating it?

The Jewish people are not a violent people by nature although it is getting harder to prove that these days in places like Meah Shearim and certain settlement areas. Many of these kinds Halachos are about self preservation – both personal and national. Otherwise killing any human being is forbidden according to Jewish law.

Even though Rav Shapira provides that disclaimer – it is the height of irresponsibility - and in my view it is a Chilul HaShem for a religious leader like a Rosh HaYeshiva to write a book wherein he teaches how one can kill a non Jew according to Halacha.
Posted by Harry Maryles at 9:52 AM