When Modern Orthodoxy is Not an Option 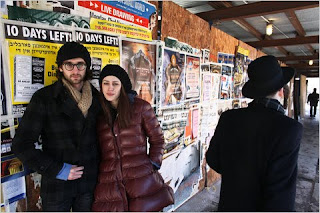 This morning a friend of mine told me about his nephew in Lakewood who is going ‘Off the Derech’ (OTD ). Unfortunately this is no longer news. This has become all too common an event among the entire spectrum of Orthodoxy.

Every segment has issues that contribute to this phenomenon. Certainly modern Orthodox Jewry has its share of young people going OTD as does the Charedi world. The causes of a young person going OTD in both segments may be different, but I believe the numbers are huge in both. It doesn’t matter whose numbers are greater. It’s not a contest. The problem is that there are any significant numbers at all.

Modern Orthodox young people who are not properly prepared to deal with the attractions of ‘the forbidden fruit’ which permeates the general culture can all to easily succumb to it. There is much less sheltering from those influences thus making it a challenge to resist when so often encountered. That is why it is of paramount importance to make sure to not limit Jewish education to the intellectual - but to include the ethical and moral. One must know what they may encounter in life and be taught how to properly deal with it.

The Charedi world has the opposite problem. Rather than exposing their young to any of the culture they believe sheltering them from it as much as possible. That- they believe - will better insure their Yiddishkeit. In a vacuum they may be right. But no matter how much they try to eliminate the outside world, it is impossible to do so. Of course that does not stop them from trying –issuing bans and constantly haranguing against just about anything secular.

Both modern Orthodoxy and Charedism has its pros and cons with respect to dealing with the phenomenon of going OTD. But the large population of Charedi OTDs should put to rest the claim that insularity helps prevents going OTD. It obviously doesn’t.

With that in mind I wonder if their opposition to modern Orthodoxy contributes to this phenomenon. I think it does.

Many Charedi leaders treat modern Orthodoxy as unacceptable as Conservative or Reform Judaism. Of course in theory they know very well that this is not so. Even the most right wing of Charedim if pressed will admit that someone who is a Shomer Torah U’Mitzvos but leads a modern lifestyle is a religious Jew with all its rights and privileges.

And yet that is not the message they transmit to their young. Modern Orthodoxy is Treif/Passul – illegitimate! It does not matter how Ehrlich – sincere a modern Orthodox Jew is about his Judaism. Nor does it matter how Medakdek B’Mitzvos, careful in all their observances they are. If they have the modern orthodox label attached to them in any way, they become persona non grata.

This is of course not true about every Charedi leader. There are some who do not act this way. Nor do I think that this was the norm back in the days of the previous generation of Gedolim. But that is the case now in far too many of their people in various rabbinic leadership positions. There are so many examples of this attitude it would take a book to cite them all. Just to mention a few:

* The attitude expressed by the Lakewood Rosh Yeshiva about Bernard Lander, founder of Touro College. After calling him a ‘Finer Yid’ he went on to slam his Hashkafos calling him less than an ideal Jew.

* The fact that there is boycott by virtually all Lakewood students against dating young women who attend YU’s Stern Coellge for Women. I’m sure there are exceptions to this boycott. But as a rule, a Lakewood Bachur will rarely consider a date with a ‘Stern girl’ no matter how religious she is.

* There is the way that Agudah treated not only YU’s then president Rabbi Dr. Norman Lamm but also Rav Hershel Shachter during their last DafYomi Siyum HaShas ceremony - begrudgingly seating them buried among a group of Rabbanim way out of sight of the crowd and completely ignored during the ceremonies.

* And of course there is that shameful and infamous obituary of Rav Soloveitchik approved by members of the Agudah Moetzes.

With so much haranguing against even the Frummest of modern Orthodox Jewry, it should come as no surprise to my friend that his nephew from Lakewood who - dissatisfied with his own Hashkafos – is going straight from Charedism to becoming complete OTD. Why even look at modern Orthodoxy? It is Pasul/Treif anyway! Modern Orthodoxy is not an option. If they don’t like what they are fed at home, they do they go straight out the door of observance.

This is true for enclaves like Lakewood where the sheltering is pretty high and the attitude about modern Orthodoxy is pretty negative. But it is even truer for the world of Satmar type Chasidim – whose sheltering practices make Lakewood seem modern by comparison.

Of course there are always unique circumstances that pertain to every individual who goes OTD. Dysfunctional families, an abusive parent, or educational issues among them. But often those are not the causes. Far too often perfectly fine families who abide completely by the norms of their community and whose children easily conform - may find one or more of those children dropping out. And when they drop out of their Charedi upbringing they completely skip modern Orthodoxy as an option.

This is amply demonstrated by a film now in circulation called, Romeo and Juliet in Yiddish - a movie produced and acted in by Satmar dropouts. It is a film that contains nudity. From the New York Times:

(Lead actor Lazer) Weiss (pictured above) was raised in an Orthodox Jewish household and broke with the faith in his teens. “Romance wasn’t something we talked about growing up,” he said. Not only that, Mr. Weiss, 26, had “never even heard of Shakespeare” until the film’s director, Eve Annenberg, enlightened him…

Mr. Weiss, who grew up in the Rockland County Satmar stronghold of Monsey, N.Y., got kicked out of yeshiva at 14 for smoking cigarettes. For a while he led a life of petty crime that included credit-card fraud and filing fake lost-baggage claims, he said.

For her part, (Melissa) Weisz, 27, (Weiss’s co-star and girlfriend - pictured above with Weiss) who had left Borough Park’s Satmar Hasidic community, and her marriage, in 2007, said she “hadn’t seen a movie before I turned 19.” She added: “I was about to meet my ex-husband’s parents, so my friend and I rented ‘Meet the Parents’.” It wasn’t what she expected, she said…

Then there was the sex scene, in which Ms. Weisz bares her breasts — a major taboo in the Orthodox world. The scene caused several Hasidic men to storm out of the London screening, though they sneaked back in minutes later, Ms. Annenberg said.

“It was pretty uncomfortable, appearing nude like that,” Ms. Weisz said, gazing at Mr. Weiss. “But it sort of made our relationship easier, you know what I mean?”

I have to wonder - had they not been indoctrinated to abhor modernity in all of its manifestations would these two young people have chosen a better path. As might have my friend’s nephew in Lakewood.
Posted by Harry Maryles at 10:10 AM