Punishment for Sexual Misconduct? Not if You're Leib Tropper! 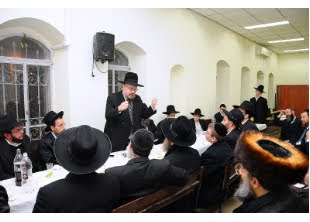 Arayos – sins dealing with sexual activity is one of the most focused upon issues of the Charedi world. And for good reason. In its most serious manifestations – among them adultery (sexual relations with another man’s wife) it is a Yehoreg V’Al Yaavor. Halacha mandates giving up one’s life before transgressing it.

In other manifestations it is treated almost as seriously. The lengths that the some segments of Charedi world go to prevent Arayos violations are pretty extreme. To that extent, enclaves like Meah Shearim and Bnei Brak have mandated dress standards for women that go well beyond normative Tznius (sexually modest) dress.

The consequences of violation of these dress codes is so severe that self appointed ‘Tznius squads’ have sprung up to ensure compliance. Hechsherim for clothing stores that sell only Tznius clothing now exist. In one instance a few years ago a store in Geulah (a religious neighborhood bordering Meah Shearim) was torched for allegedly selling clothing that was not Tznius by their standard.

Separating the sexes is a priority among all Charedim and there is great vigilance to do so at virtually every level - all in the name of preventing violation of Arayos. Some of the lengths are so extreme they seem absurd to the average religious Jew. There are Chasidim for example that never walk together with their own wives in the street. Women are always several paces behind the men. I witnessed this many times when my parents lived in Bnei Brak where the custom is to take Shabbos walks down their main street (R’ Akiva Street) after the Friday night meal.

Examples of how far the Charedi community goes to separate the sexes are far too numerous to mention. The point is that sexual sins are seen as among the worst offenses one can commit.

And yet when it comes to sex abuse accusations among their own there is an almost 180 degree change in attitude about it. There is almost complete denial of any sexual misconduct in that world. Every accusation seems to be treated as a lie. This trend is changing a bit in some of the more more mainstream Charedi circles – at least in the US.
But there are far too many Charedi enclaves where the operative word is denial. One of the more recent and egregious examples of this is a published document proclaiming – not only the innocence of a convicted sex abuser (multiple times of his own daughter) but proclaiming him to be a Tzadik!

But now we have an even more recent and perplexing example of this attitude. The story was reported on the Charedi website B’Chadrei Charedim (Hebrew). Rav Daniel Eidensohn has a translation (in the comments) of a portion of that article on his blog Daat Torah that states Leib Tropper was accorded great honor by several Charedi Rabbanim. We should remember that the Tropper case was not one that is typically attributed to biased anti Charedi secular media coverage - a media they claim lies and distorts everything Charedi.

One can perhaps understand the naiveté of an insular group that is paranoid about media bias not believing any negative reportage about one of their heroes. Especially when that hero denies it all. But this is not the case with Tropper.

He was caught on tape encouraging one of his potential female converts to participate in some pretty kinky sex. In fact it went way beyond encouraging her. He practically used extortion implying that her conversion to Judaism was on the line if she didn’t give in to his sexual fantasies. After several conversations like this, that woman had the foresight to record later phone conversations with him. It is all on tape. There was no way for Tropper to spin this. He knew it and resigned from his post as head of EJF an organization he founded to ostensibly help standardize conversions to Judaism.

Until he was caught trying to indulge his own sexual perversion he was seen as a leader in the conversion controversy – garnering much support from Charedi Rabbanim that many consider Gedolim. So it is clear that he not only abused the power of his position – he did it to gain sexual favors from a person vulnerable to his whims!

How they can allow this man to show his face anywhere in their world is something I do not understand. But to treat him as a hero and to lavish praise on him is so ridiculous that it makes a mockery of the very thing they are strictest about!

On the one hand their extreme attitudes about sexual matters produces aberrational behavior that give the thugs among them an excuse to beat up a religious woman who sat in the unofficial men’s section on a bus to the Kotel. And many similar thuggish acts like it. And yet a lecherous Rav who is a proven sexual pervert – caught preying on a vulnerable protégé is treated like a conquering hero of Kiruv!

What does this say about the leadership of a community so strict on matters of sex and yet honors a man who abused his power to gain sexual favors from a female under his wing? Is there any possible way to spin this in a positive way?

I guess it is the same mentality that moved a group of Chasidim in Israel to successfully fight the extradition to the US of one of the most infamous child sex abusers of all time, Avreimal Mondrowitz.

I guess that in certain Charedi circles if one has a beard, wears a black hat (let alone a Chasidic Bekeshe and Shtreimel) and talks the talk, it doesn’t matter what he did sexually. Denial rules the day even when the evidence is clear. It only matters when a non Charedi woman sits in the men’s section on an empty bus.
Posted by Harry Maryles at 9:50 AM