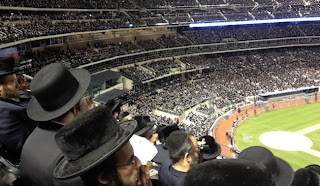 I was not able to attend the Asifsa even though I am currently in New York. Not that I wanted to go. But it would have been worthwhile attending just to hear firsthand what was said.

Unfortunately I am not surprised by what apparently took place. The only coverage I was able to find thus far is in  Ha’artez. If what they report is even half way true - this great gathering followed exactly the path that I predicted. It appears that the internet was completely trashed as having only destructive value. It reiterated pretty much what Rav Matisyahu Salomon said in a Hamodia interview:

“The purpose of the [gathering] is for people to realize how terrible the Internet is and, of course, the best thing for every [good Jew] is not to allow it in his home at all…”

The evening apparently focused on this theme but realized that banning it can’t work. On the plus side and despite rumors to the contrary Ha’artez reported that “the event opened with a Kosher Tech Expo featuring Web filtering technology.”

As I also predicted this was not only about warning people about the dangers and how to go about avoiding them through filters and the like. It was about control.

I received the following message from someone who sat through the speeches.  When I read it I almost lost my lunch. He heard Rabbi Ephraim Wachsman quote a passage from Rabbenu Yona’s Shaarei Teshuva which says that when Riv'vos Yisroel (multitudes of Israel) gather and decisions are made by the leaders for action of the group, anyone who separates himself from the group has no chelek in Olam Haba'a.

If this Asifa is an example of what Rabbenu Yona was stalking about, then anyone who heard what was said, and doesn’t fully agree with the decisions made, might as well go out and have a cheeseburger right now. You have lost your Olam Haba.

An earlier e-mail I got said the following:

Listening to the 'Asifa'.  Disgusted.  The silent majority is depending on you to inflect some sanity into this discussion....  Know this to be true - there are hordes of us in the 'black hat' camp who stand with you and agree with you.

Again I am not surprised at this ‘silent majority’.  Unfortunately they too can go out and buy cheeseburgers now.

How sad it is that this Asifa was filled only with half truths. As I have repeatedly written the interent is not evil incarnate. It is a tool and when used properly is a boon to mankind. And when used improperly it can be a tremendously destructive force.

I have never disagreed with these rabbinic leaders about the seriousness of the danger here. My quibble with them used to be in how to deal with those dangers.  The ideal for them was banning it as much as possible. I had always supported using it with care and if needed (as in the case of having children in the house) using filters. And keeping any computers out in the open and not in closed areas like a child’s bedroom.

I guess they heard me. Partially. But now that they have realized what most ot the rest of us  knew long ago, they nevertheless have still not let go of casting this medium in the same negative light they always have.

In my view the biggest problem with the internet is not pornography. It is perhaps the most dangerous, but not the most widespread. Nor is the problem blogs like mine that will occasionally question the decisions made by some of the more right wing rabbinic leaders. As long as the questions are sincere and not insulting. Questions are a good thing - not a bad thing. It is questions like mine about the wisdom of trying to ban the internet being raised in public - that may have contributed to these Rabbinm changing course.

The biggest problem in my view is something that has had little if any focus. Bittul Zman –wasting time.

If there is any area where we can improve ourselves it would be in the area of using our time more wisely. I’m not sure I have the answer to that and am probably as guilty of it as anyone else. But at least I am raising the question.

Is the draw of pornography the great Nisayon (test of our religious resolve) for masses of our time as advertised?

I tend not to think so. I have a normal sex drive and am just as susceptible to seductive images of women as most men. But I have absolutely no desire to look for those images on the internet. No matter how many ‘pop ups’ or e-mail spam that try to entice me into their web, I simply don't go there and have no desire to. I have a feeling that this is true with the vast majority of adults males. Especially married men. There is a conscept called Pas B’Salo (…bread in one’s basket – a euphemism for the ability of married men to delay sexual gratification by dint of being married.)

What about stories of innocent victims we hear about? I believe them. They are real. But I’m not sure how innocent they ultimately are. In my view these people have unresolved sexual or addiction issues they may not even be aware of. Or they may be aware of them and simply have kept them to themselves. Or are just fooling themselves.

These are the people who need it the most and they are going to use it the least.  The Asifa did little to help them other than give them even greater guilt.

What they need is professional counseling and care. They need understanding and patience from their family. What they don’t need is the fire and brimstone of a right wing Kanoi telling them that they have lost their Olam Haba.
Posted by Harry Maryles at 12:30 PM