Satmar and the Asifa – Achdus or Isolation? 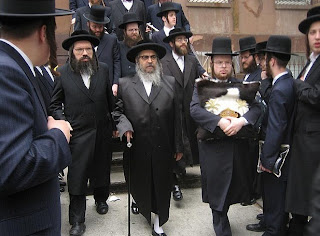 Well… so much for Charedi Achdus. VIN reported late last Thursday that Rav Aron Teitelbaum, one of the two Satmar Rebbes has weighed in on today’s Asifa. You know, the Asifa that accommodated Satmar be inviting only men to it since there could be no Mechitza... and no Satmar Rebbe would ever allow his Chasdim to attend it without one. Even if there would be separate seating.

The organizers of the Asifa are desperate to make this about Achdus even more than they are about fighting internet. They therefore felt it was more important to have Satmar invloved than to have women attend.

This despite the fact that it is the mother who is in the trenches. Mothers are the guardians of the home. Their husbands are all in the Beis HaMedrash. Morning, noon, and night. Unless they have fallen so low spiritually that they now work for a living. Either way it is the woman that is on the front lines. Not the man.

But that’s OK. It’s worth the price in order to have this great moment of Achdus. They now have Satmar on board. At least that’s what they thought.  What about Modern Orthodox Jews? Not needed to make an Achdus statement. All that is needed is the right wing Yeshiva world and the Chasidic world. They will have Achdus without them.

Except that the Satmar Rebbe just told their Chasidim, “Don’t bother going”. Why? He said that it was not in the best interests of his followers.  But that isn’t all. From VIN:

“It is impossible to speak to every person in the same way.  There are people who are already filtering their internet and other who need to be told that they should not have a computer in their house at all.”

Well… that sounds pretty much like some of what those of us who were criticizing this event were saying.

Not that this is the only reason some of us were so perplexed by this big push to attend. As I said in an earlier post, it was also about their starting point. To Charedi leadership the interent is the “Great Satan”!  They’d prefer banning it, as would the Satmar Rebbe. But since they realize they can’t, they need to learn how to deal to deal with this Great Satan. Part of the purpose of this Asifa is to make sure that everyone else sees it that way.  As I also said, those of us who use the interent in positive ways know that’s not true.

But there is another aspect to their reluctance to attend this Aisfa that is quite revealing.If one wants to have a glimpse into the mindset of Chasidim like Satmar, note the following statment made by the Rebbe as another reason not to attend:

R’ Teitelbaum also took issue with the fact that the Asifa would be conducted in English saying “our forefathers fought against having speeches in the languages of other nations and I do not want to send my followers to a place where they will be speaking a foreign language.”

I was under the impression that Satmar agreed to a compromise where some of the speeches would be in English and some in  Yiddish. I guess that is really not good enough.

No matter how many times I hear something like this, it still somewhat shocking to hear. But it really shouldn't be. Anyone who has ever heard a Satmar type Chasid speak English will note that they will speak with a foreign accent – even if they were born in the United States. That’s because they learn Yiddish first and it is the primary language in their homes.

English is learned as they get older – as a second language. The grammar... the syntax... is messed up. On purpose! They are actually encouraged not to speak that way - and take pride in it. I suppose they consider it a kind of Chukas HaGoy to speak English too well.

I have always believed that speaking the language of the host country well is a positive thing. Being able to communicate well and not embarrass yourself and your people is a good thing. Not a bad thing.    From their point of view not speaking English well gives them a fringe benefit. It helps keep them isolated! I guess for Satmar there is no Achdus outside of Satmar.

I do not mean to say that they want to completely separate from the rest of Klal Yisroel. On the contrary. They have some great service organizations. Like their legendary Bikur Cholim Society where Satmar Chasidim visit the sick and provide all manner of help to them - no matter what their Hashkafos or level of religiosity. Including completely secular Jews. If a Jew is hospitalized and they know about it, they are there for them.

But outside of this type of kindness, it appears that they prefer to stay isolated even from other Charedi Jews. Their leaders will not share the stage with other Charedi leaders because those leaders are not… well… Frum enough. After all they speak English without an accent.

Consider all of that and some of their other problems which I written about them. And yet Satmar Chasidim are probably among the fastest growing segments in all of Orthodox Jewry.

I don't know... I somehow just can't believe that Satmar Chasidus is the direction that God wants His people to go.
Posted by Harry Maryles at 10:01 AM