An Event Worth Celebrating 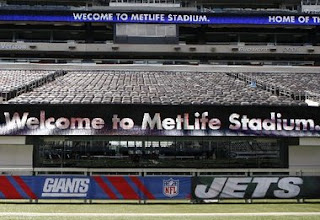 Tonight is the “Big One”! There will be a record number of attendees at the Agudah sponsored Daf Yomi Siyum at MetLife Stadium in New Jersey.

Daf Yomi is the program started by a Rav Meir Shapiro at a 1923 Agudah assembly in Poland. It entails studying one 2 sided page of Talmud per day. Completing the Talmud this way takes 7 and ½ years. We are once again at that point. For the  12th  time.

The 90,000 seats at MetLife have been sold out for some time. There are people are still scrambling to find tickets somewhere. I heard that there are people actually scalping tickets! Rumor also has it that over 1000 people from Chicago will be at MetLife tonight.

New Jersey is not the only place that will be celebrating the completion of Shas. There will be simultaneous celebrations across the globe including one here in Chicago. I will be attending that one tonight. Just as I did last time 7 and ½ years ago.  (I also attended the 10th Siyum at Madison Square Garden 15 years ago).

The MetLife program will be broadcast live in part to over 80 cities and 14 countries.  Add to that several private Siyumim by various factions of Orthodoxy and this could be the largest single “moment” of Achdus of the both the 20th and 21st century.

I have been critical of Agudah’s refusal to include Roshei Yeshiva from Yeshivas Rabbenu Yitzchak Elchanan (YU). I firmly believe that it strongly detracts from the Achdus they will no doubt claim. But this post is not about that. It is about the Daf Yomi phenomenon itself. The celebration of its completion is a very worthy event. Worthy of the very large attendance it will surely have. To the best of my knowledge - more Baalei Batim are learning more Torah than at any time in history.

And they come in all “shapes and sizes”. There are Shiurim geared to Chasidim, to the Yeshivishe crowd, to the university educated, and to novices with no background at all. The Maggidei Shiur (teachers of these Shiurim) range from the extreme right to the extreme left. There are even Daf Yomi Shiurim for women – by women.

I think the goal of Achdus sought by Rav Shapiro in establishing Daf Yomi has been more than met in at least one area – that of learning Torah. 2 Jews who are away from home and never met – now meeting  for the first time can bond in discussion of Torah. All Jews who learn Daf Yomi are now connected.

The credit for this explosion in Torah learning is due to 3 factors in my view: The advent of Community Kollel; the publication of the ArtScroll Shas; and a thirst for Torah knowledge by people with little time and in some cases the inability to pursue it on their own. The idea of learning all of Shas one page at a time for about an hour a day is a very appealing concept for people like this. Community Kollelim were more than happy to accommodate them by setting up Shiurim. Inspired by these Kollel Shiurim other Daf Yomi Shiurim have mushroomed all over the world.

There has been much written about the value of this kind of Torah learning. For example in a Hakirah article there is a lengthy and well sourced treatment of the subject. The author, Heshey Zelcar suggests that in most cases Daf Yomi Torah learning is so superficial that it is barely worth the effort. Here are excerpts from his conclusion:

(T)he current method of  Daf Yomi, as practiced by many, of covering an entire  daf in a single hour and then not reviewing that daf until the next cycle, seven and a half years later, is clearly not the ideal type of Talmud Torah. It is impossible for most people to properly analyze and understand two sides of Gemara in a single hour. It is even less likely that the concepts contained in the daf will sink into one’s mind… Perhaps those who have only an hour to study each day should investigate other types of learning that they can enjoy and which do fulfill the requirements for the ultimate form of  Talmud Torah.

How sad it is to tell the vast majority of people who have spent the last 7 and ½ years that they could have spent their time better doing something else. It isn’t that I don’t agree about the greater value of a more in-depth type of study.  I do in fact agree that studying and knowing any subject well requires a great deal of effort. It requires diligence and review. Which involves a lot of time.  Much more than the typical hour spent per day on Daf Yomi.

But the impression one gets from the author is that it is almost a waste of time to learn Daf Yomi if one just goes to a Shiur. That is the furthest thing from the truth.  Some of it is retained even if it isn’t reviewed.

If one has a Yeshiva background - it helps maintains the level of learning you achieved there as you now swim the sea of Talmud daily.  You are constantly reviewing  the principles of Torah study as well as those Sugyos you studied as a Yeshiva student. Not to mention new concepts you tend to pick up in Mesehctos that Yeshivos don’t learn. Is there no value to any of that?

A great example of at least one person who benefited from learning Daf Yomi can be found in a blog called Havolim. I know the blog owner and will only say that he is a brilliant Talmid Chacham with a connection to one of the biggest Gedolei HaDor of the last century. The post describes one individual who was inspired to begin learning Daf Yomi after attending the Daf Yomi Siyum in Chicago 7 and ½ years ago. It is a most unusual story involving an incident with a female Daf Yomi Magid Shiur.

With the completion of this cycle I will have gone through Shas 3 times. I will begin my 4th cycle right along with the rest of the world this Friday. No doubt there will be new people all over the world joining the club. I have benefited greatly from learning Daf Yomi and I hope to be doing it for a long time to come.
Posted by Harry Maryles at 12:15 PM