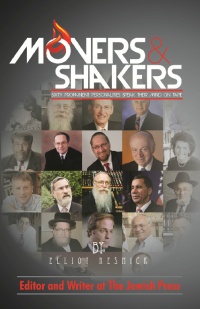 I am flattered.  Elliot Resnick has put me into a group of people that I am clearly not qualified to be in. (Yes, that’s my picture that was included on the front cover.) But it does feel nice to be considered a mover and shaker. Although I am probably more of a shaker than a mover.

I of course realize that Elliot also does not consider me to be in the same league as say, Lord Jonathan Sacks another one of the 60 interviewees he included in his book. But I understand why he included me... and it is not because I stand anywhere near the likes of a Lord Jonathan Sacks. Still, it feels good.

The book I am speaking about was just released and is called Movers and Shakers. It consists of a collection of interviews Elliot has done with 60 prominent and not so prominent people in different facets of Orthodox Jewish life that have helped shape the public discourse.  He has divided the interviews into separate categories as chapters. They vary from from the philosophical to the mundane. From the business world to the world of entertainment.  He has chosen my blogging colleague Rabbi Gil Student (who has included a table of contents in his announcement of this book) and me to represent the blogging world.

By asking the right questions Elliot was able to capture at least in part the essence of each of his subjects in just a few brief paragraphs. He did so in an organized fashion that he describes in the preface.

For example in the interview of Professor Marc Shapiro he was able to ferret out some of the key elements of his philosophy.  Included are things like his considered opinion of how the Seredei Aish (Rabbi Y. Y. Weinberg – the subject of Professor Shapiro’s first book) would have viewed today’s Orthodoxy and his views on the Agudah; How certain rabbinic visionaries balked at the conventional rabbinic wisdom of their day; His views that the 13 Maimonidian principles of faith  were not always the way Judaism was defined; How the Shulchan Aruch is not always followed even among the most stringent Charedim; and his views of today’s Gedolim - both Charedi and Modern Orthodox.

The combination of brevity and thoroughness with his subjects is evident through much of his book.

At the risk of being accused of personal bias - I highly recommend this book. It is an easy read and each interview is independent of every other making it easy to pick up and read in a bio in a matter of minutes. Or you can read the entire book in one sitting as one of the reviewers quoted said she did.  Among those commenting favorably that are listed on that back cover are Rav Hershel Shachter and Rabbi Berel Wein.

There is one thing I want to make clear about my own interview.  Elliot has subtitled my interview as representing the views of my Rebbe, Rav Ahron Soloveichik on the blogosphere. While it is true that this interview does include Rav Ahron’s Shitos (positions) as I understood them and I often will state what I believeare his views on various issues of the day, I can’t honestly say that his views and my views are identical. I therefore would not claim to represent him.

People as disparate as Rav Mordechai Rogov, a great Charedi Gadol of European vintage, Rabbi Yaakov Perlow, the current head of Agudath Israel and Dr. Eliezer Berkovits, whose views on many important Hashkafic issues were in direct opposition to Rav Ahron’s also influenced me. As did my studies of Rav Ahron’s illustrious brother the Rav… and a great many other people including my parents, friends and teachers along the way. Some of whom are mentioned in my bio.

But this does not diminish the value of this book. It will provide the reader a wide variety of views on important issues of the day in as brief a method as possible. And as I said - I highly recommend it.
Posted by Harry Maryles at 1:07 PM