Give Him a Chance 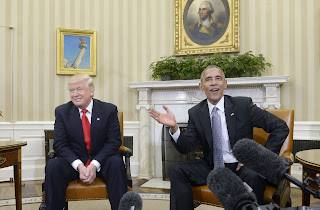 It’s hard... really hard to move away from the Trump phenomenon. I tried to do that yesterday. But Donald Trump’s victory in the election has sucked just about all the air out of the room. It’s the story that keeps on giving. Most of the civilized world is thinking about little else.

As might have been expected, the moment Trump shocked the world with his win, the protests began.  Some of them have seen violence. Those that are violent and damaging private property are criminals that ought to be arrested and prosecuted to the fullest extent of the law.

No one can deny the American people the right to protest whatever they want. But how should we look at these protesters? Are they right to protest the results of an election that was decided in a democratic way by the American people? I don’t think so. They are protesting a man that half of America considers to represent most of their values – even if they disagree with some of them and don’t like his character.

What about his disgusting insults of immigrants, minorities,  the handicapped, and women during the campaign?  Half of America doesn’t care what he says. They care about what he has promised to do for them. Remember, we are not talking about Neanderthal uneducated hillbillies. We are talking about half the country. And a lot of people that Clinton should have won by super majorities. Like Women.  For example, a statistic I recently saw said that Clinton won 51% of the female vote. That means that almost half the woman that voted – voted against her!

As was the case with most Americans I did not like either candidate. But I felt that Trump was so bad that there was no choice but to vote for his flawed opponent. As bad as I saw Mrs. Clinton to be, she was gold compared to Trump. And I urged others to vote for her too.

I thought (as did just about everyone else) that Hillary Clinton would be the 45th President of the United States. And that last Tuesday would be the last we’d hear much about a man who I thought was the least qualified man in the history of the United States to be President. But, as I’ve already admitted many times I was wrong about everything. And shocked that he won right along with everyone else. Although I predicted he would win back in May I had come to disbelieve that considering how bad he truly was.

What now? I never believed that what you saw is what you would get with Trump as President. True he was incompetent. But I saw that as an asset in a certain sense because he knows how incompetent he is. He will therefore surround himself with competent people who will advise him how to carry out his agenda.

What about that agenda? It appears that it has little to do with his campaign promises except in a general way. That view has been corroborated by President Obama who after meeting with Trump said he saw a different man than the one he saw on the campaign trail.

Just to cite some examples of how his campaign rhetoric differs with how he will govern: He will not deport illegal immigrants the majority of whom he said are good people. He will only deport illegal immigrants that are criminals. He will not deny Muslims entry into this country. He will only increase scrutiny of them to assure that no terrorists will slip through. He will honor all foreign alliances including NATO which he put under question during the campaign. In fact the President is currently in Europe reassuring our allies - nervous about Trump  - of his commitment to defend them. Even Obamacare will not be entirely dismantled. He plans to keep certain provisions of it. Like eliminating pre-existing conditions as an exclusion from insurance. And Obamacare will not be repealed until a new health plan is in place

As for his temperament during the campaign which was embarrassing and clearly not presidential, that too has changed. As I knew it would. It was a different ‘Trump’ I saw being interviewed on 60 Minutes than what I saw during the campaign. He was subdued. Even humble – complimenting the President and Mrs. Clinton. What about his promise to jail Mrs. Clinton?  Although he didn’t outright dismiss it, I am convinced that this is off the table. In short - all of his rhetoric during the campaign was just that. Rhetoric! Designed as red meat for his base supporters.

For his part, President Obama paid tribute to Trump acknowledging that Trump tapped into a feeling among Americans that was so strong that it overcame all of the negative things he said and did during the campaign. Things that were magnified over and over again by the media and ridiculed by comedians on late night television.

The message by the President yesterday was that Trump should be given a chance. I wholeheartedly agree. That the office itself will sober him up. Obama said that Trump is not an ideologue. He is  a pragmatist and that should serve him well. I think that’s right. Trump has a clear direction in which he wants to take this country and if he finds good people to advise him - he will do well. The American people should not judge him until he is given an opportunity to do what he sets out to do - and see if he is successful.

Will he make America great again? I agree with those who say that America is already great. So the real question is will he make it greater. That remains to be seen. But I hope he does.

Speaking of appointing good people, he has already appointed 2 of them: His VP pick was Mike Pence; and Reince Priebus is his choice for the powerful office of Chief of Staff. Today it was revealed that the 2 contenders for Secretary of State are former New York Mayor Rudy Giuliani and former US Representative to the UN, John Bolton. I cannot think of 2 people that are more pro Israel than they are. Can anyone imagine the kind of relationship this country will have with Israel if either of these two are Secretary of State? This could put an entirely new spin on how the US sees a final solution between Israel and the Arabs. It will favor Israel’s point of view under Netanyahu.

What about ‘elephant in the room’? Donald Trump has announced that Steve Bannon will be given the title of White House Chief Strategist and Senior Council - a very powerful position of influence. Bannon has been accused of being an antisemite by the Anti Defamation League.

Which should be no surprise. During divorce proceedings, his ex-wife had accused him of antisemitic comments. (He has denied that.) Not to mention publishing an article about Conservative commentator William Kristol  that called him a renegade Jew when he threatened to find an alternative to run against Trump in the general election. Bannon’s far right conservatism has also attracted a lot of support from White Supremacist groups – indicating that he is a racist as well.  It’s hard not to see him as a racist and antisemite in light of that.

To be honest, I am not thrilled about Bannon having any influence on Trump. But in his favor is the fact that there is no actual proof that Bannon is personally either an antisemite or a racist. That he attracts racists does not make him one. His nationalist ‘America First’ rhetoric appeals to these retrogrades who see that phrase as a euphemism for racist views. But what was Trump’s primary message if not about putting Americans first? Americans that lost their jobs due to globalization and have been forgotten by the governing elites. These Americans were Trump’s core constituency and the ones that got him elected! Besides isn’t putting America's interests ahead of the interests of other countries something we Americans should support?

One has to look at the total picture and not just one man that is unappealing to us. If people like Giuliani or Bolton are there to advise Trump on foreign policy, I don’t think we have to worry too much about what a ‘Chief Strategist’ will tell him.  Besides – it appears that Bannon is pro Israel. If that’s antisemitism, I’ll take it!

The bottom line is that when you are given a fait accompli – there is nothing to do but to look at the positive side and hope for the best. There is absolutely no point in harping on Trump’s flaws or dwelling on what he said during the campaign. Or protesting his election.

The President believes that Trump wants to unite the country. He is rooting for him to do that. As am I. It is incumbent upon us, the American people to give him the chance to do that.