Is Objectivity a Thing of the Past? 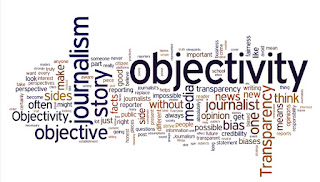 One of the more disappointing things I have experienced of late is the inability of far too many people of my own people (i.e. Orthodox Jews) to see ‘the other side’.  It is almost as if they have a blind spot to it. Refusing to acknowledge even the possibility that a point of view different from their own has even the slightest validity.

I have always been able to do that. To look at views that are different than my own and recognize the validity of many of the points they make. As it applies to political views, the same thing is true. I can see both the left and the right and not call either of them evil. I try and assess the values each side will bring to the table without my own prejudice interfering.

Unfortunately of late - I do not see enough of that among far too many of my own Orthodox community that tend to be politically conservative. Nor do I see it among non Orthodox that tend to be liberal left Jews (…many of whom have adopted the term progressive instead of liberal left. I guess a word that implies progress sounds better to them. Although I reject the notion that being liberal is necessarily indicative of progress.)

This has become ever more apparent during and since the last Presidential election. I was actually shocked at how many of my friends from across the Orthodox Hashkafic spectrum supported Donald Trump. It seemed so irrational to me. Just like their hatred of the current President.

A poll taken after the election substantiated what I knew intuitively. The votes cast in Orthodox Jewish sections of Chicago and New York – 2 states that Mrs. Clinton won handily - showed that an overwhelming majority of Orthodox Jews voted for Donald Trump!

The explanation of this kind of support for a man whose speech and general manner is anathema to Jewish values would be puzzling if not for the fact that his opponent was so hated by them.  Perhaps they saw Mrs. Clinton as an extension of Obama. That would explain the vote somewhat. But I don’t see how a man that is such an embarrassment to this country and even more so to Orthodox Jews - could garner so many Orthodox Jewish votes.

What is it exactly that makes their hate for Obama and Clinton so visceral; so extreme that they are willing to support the most embarrassing and unqualified candidate for President in American history? When I asked some of my Trump supporting friends that question, the response was almost incoherent in its level of hatred for these two. The usual explanations about the lack of support for Israel, or the lack of  values observant Jews seek in a candidate - did not match their hatred toward them. When I pointed out some of the obvious embarrassing things Trump had said – they seemed to just shrug them off with the claim that it was just too important to keep Mrs. Clinton out of office looking only at her failings and ignoring Trump’s.

I never quite understood that kind of hatred… and still don’t. But it’s there in spades. Furthermore I don’t think any of those who voted for Trump regret it – even as Mr. Trump seems to be digging himself into an even deeper and more embarrassing  hole on a daily basis than I would have ever imagined - just by his daily tweets.

He managed to get the entire world upset with his comments of late – including some pretty high profile conservative public servants that should have been his natural allies.  Both in domestic and foreign policy.  We are just 3 days away from Trump taking over the reins of government! And still no regrets about electing him. Only relief that Obama will soon be history and that his natural successor, Hillary Clinton, won’t be taking his place.

They might argue that their vote was justified after all - now that Obama has ‘shown his true colors’ as anti Israel by allowing the UN to condemn Israel.  A policy they can say with some justification would be continued by Clinton (although that is far from certain). But this was not the case when they voted overwhelmingly for Trump.

There is no reasoning with my fellow Orthodox Jewish Trump voters. Their hatred for Obama is so irrational, they refuse to acknowledge even the remotest possibility that he might actually not be anti Israel at all. Even after the allowing the UN to condemn it. They are in a complete state of denial about anything he ever did for the Jewish State.

No one was more upset than I was at Obama for allowing a one sided condemnation to pass at the UN.  He was wrong. In my eyes this has done more harm than good. But at the same time, I am absolutely convinced that he believes what he did was in the best interests of both Israel and the United States. He believes that Israel needs to be nudged a little more forcibly than it has in the past about giving up settlement construction. That he has also specifically said that settlements are not the only impediment - is ignored. Obama knows and has said that Israel deserves to have security before any peace treaty can be executed. And that is on the Palestinians. It’s just too bad that he didn’t follow his own past precedent of vetoing one-sided UN condemnations that didn’t address that issue.

That he was so clearly wrong on this does not negate what he has been so clearly right about. He actually did something about Israeli security. He has given Israel more financial, intelligence, military, and defense aid than any other President in history. But it doesn’t seem to matter to the Obama haters. He is not given an iota of credit for that. He is seen only as anti Israel.

There are other issues that they have with the outgoing President. Many of which I agree.  I do not accept his views on a variety of social issues. Just to name one, his support of gay marriage. Nor do I accept many of his foreign policy decisions. Like allowing Syria’s Assad to cross his own red line with respect to using chemical weapons!

Mrs. Clinton is in the same category with respect to many of those issues. Especially the social ones. So it might be understandable that Orthodox Jews would vote for an individual whose policies on social issues reflect more of their own. And Trump has certainly said the right things along those lines. His stated views on things like abortion more closely align with the Pro-Life position that most Orthodox Jews favor. The problem is that his behavior and gutter like comments – especially those spoken in unguarded moments - are the exact opposite of those values.

It is as if all the Orthodox Trump voters have closed their eyes and ears to what he has said and done and only heard him mouth conservative values. Are they still so sure that what he says he will do in these areas, he will actually do? I’m not, much as I would like them to be in those areas where it would match my religious views.

It is because of all these issues taken into account that I voted for Mrs. Clinton. I do not see things in as black and white terms that so many of my coreligionists of the Orthodox persuasion do. Obama is not all bad. Clinton is not all bad. And even though I voted against him, Trump is not all bad either. There seems to be an inability of the Trump haters to acknowledge that too. So visceral is their hatred for this man that even his accomplishments are spun in negative ways. Trump can do no good in their eyes. I guess objectivity is a thing of the past.


Of the three, Trump worries me the most. He is going to be the next President and it seems that my Orthodox friends who voted for him - and seem to still support him are quite happy about that. I just don’t get it.
Posted by Harry Maryles at 11:12 AM