Where Do Arab Israelis Really Stand? 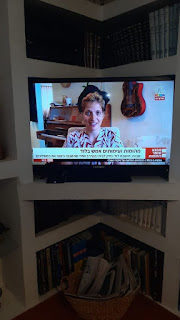 I’ve said this before. Rabbi Meir Kahane understood the Arab mindset better than anyone. I realize that coming after my strong condemnation of the Jewish psychopaths that follow him - this comment might seem strange if not shocking.  But I used to read his column in the Jewish Press religiously and found myself mostly agreeing with his analyses.

That said, I strongly opposed what he thought we should do about it. Some of which included forcibly putting Arabs on trucks and shipping them out of the country if they did not agree to accept Israel as a Jewish state and live as second class citizens with no voting rights.

Rabbi Kahane’s solution to the ‘Arab problem’ was reminiscent of what Nazi Germany originally tried to do about the ‘Jewish problem’. At first they just wanted to ethnically cleanse Germany of all of its Jews. Since no country was willing to take us in, Hitler came up with the ‘Final solution’ as the only way to get rid of us.

I recall very vividly how my Rebbe, Rav Ahron Soloveichik, completely rejected Rabbi Kahane. As did every other rabbinic leader of that time. It didn’t matter that Rabbi Kahane understood what Arabs were really thinking. Or how sincere he might have been; or how religious he was. Rav Ahron knew quite well what the Arab mindset was. But he was appalled by Rabbi Kahane’s morally repugnant approach. An approach that would have brought massive tragedy upon the Jewish people. And an approach that would have brought shame on us all. Coming from a Gadol like Rav Ahron who was one of the strongest supporters of the settler movement - that was quite the condemnation.

Rabbi Kahane’s solution was considered racist by Israeli lawmakers. It didn't help matters that he called Arabs ‘dogs’ - often without making any distinctions between one Arab and another. His party ‘Kach’ was deemed racist too, and it barred from running for the Keneset again - after having won a seat in the previous election.

For what its worth, I don’t think Rabbi Kahane would have ever done or approved of what some of his followers have done in his name. It should nonetheless not be lost on anyone that his rabid verbal attacks against Arabs surely fuels their actions. They took his disgusting rhetoric to the next level.

But Rabbi Kahane's understanding of the Arab mindset cannot be understated. He once very wisely said, ‘You cannot buy Arab pride with flush toilets’ (...or words to that effect).  That was in response to what many people in his day believed about them. Which was that Israel has given Israeli Arabs the ability to live a lifestyle far better than most Arabs in other countries. Most Israeli Arabs live very comfortable middle class lives with a standard of living not much different than that of Jewish Israelis. With identical voting rights. A lot of people believed that living in this way would make them all patriotic Israeli citizens.

There are Israeli Arabs that are patriotic. Lucy Aharish comes to mind. But I’m not sure how many there are like her or how deep their patriotism is. When Arab pride is at stake, their loyalty is to their own people. Just as Jewish pride is to us. The fact is that many Arab Israelis have started referring to themselves as Palestinian Israelis. Their ethnic pride having laid dormant until they start seeing fellow Arabs being harmed. There are cities in Israel that have mixed Jewish and Arab neighborhoods.

Now that Israel is being bombarded with thousands of rockets from Gaza and needs to defend itself by striking back - those ‘patriotic’ Arab citizens are showing where their true loyalties lie. Which is with their fellow Arabs in Gaza. Their ‘flush toilets’ have not made them patriotic Israelis at all. Their patriotism is toward their own people.

This has sadly been made evident by the unexpected way in which Israeli Arabs have responded. Which has been wrth violence against their own Jewish neighbors. This is best illustrated in a tweet by Lindy Rubin about her daughter-in-law who is a Jewish  resident of Ramat Eshkol - a mixed Jewish/Arab neighborhood in Lod. It is featured in Rafi’s blog. And reveals the truth of what Rabbi Kahane said about them decades ago. Read it and weep:

This is my daughter in law, Shvut. (See photo above.) She and my son, Tsur, and their 3 children live in Lod. In a neighborhood called Ramat Eshkol which is a mixed neighborhood, Jews and Arabs. She was interviewed on the news after a harrowing 2 days of terror. The most shocking thing she told me was that one of her Arab neighbors directed the crazed Mob to throw a molotov cocktail into their apartment. Luckily it didn't catch fire. Today she asked another Arab neighbor, who always greets her with a smile, what she thinks about the situation. The woman said to her - you deserve whats coming to you. After all, you stole our country.

Thats it folks. The real narrative. Its them or us.