A Thousand Words Versus One Picture 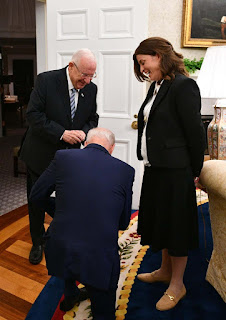 Yisroel Besser is the Deputy Editor of Mishpacha Magazine. He is also one of their more intelligent and open minded columnists. Two weeks ago, he wrote a beautiful tribute to one of Judaism’s most precious values: Motherhood. Which is the most important role of the Jewish woman. It is a value that seemed to be acknowledged by the President himself. On a visit to Israel’s outgoing President Reuven Rivlin, he got down on one knee and bowed his head humbly in front Rivka Ravitz - one of Rivlin’s key advisers that was introduced to him as a Charedi mother of 12.

As Yisroel noted this image is powerful ‘because it expresses a truth we know well’. At least I hope we do. The truth is that feminism (at least in its original incarnation) has done a lot for the modern woman - including Orthodox Jewish woman. It has given them the chance to achieve great financial success outside the home in areas traditionally reserved for men. But motherhood seems to have suffered some collateral damage. Its importance seems to have been made almost irrelevant in how many women identify themselves.

To me there is nothing more valuable to humankind than motherhood. It is a shame that in some circles becoming a mother is seen as an impediment to achieving great success. Many modern day women choose to forgo that lofty goal in favor of that.

Thankfully that is not the case with most Orthodox Jewish women regardless of which segment of Orthodoxy they identify as. The successful women I know (which includes women from across the entire spectrum of Orthodoxy) are mothers first and have nevertheless achieved tremendous success outside of the home.

This is exactly what Rivka Ravitz is doing. In spades! Raising 12 children is by itself a full time job. It requires energy and patience that to me seems superhuman. Adding a career as demanding as hers makes her beyond superhuman. And yet, I’m sure she isn’t the only one. This is why Biden bent down on one knee and bowed his head in awe and respect. For someone as progressive as he has lately become, that unscripted act says that his awe was genuine. It came from the heart.

I think we can all learn something from that. Motherhood needs to be returned to its former place of glory atop the list of mankind’s priorities. Today’s feminists should acknowledge that, too. I fear that in all too many cases, they do not – seeing it instead as a choice among many that are of equal value.

Yisroel is right to highlight this story and its important message. It tells you not only about the high value of motherhood, it tells you a bit about Biden who understands that too. When the leader of the free world does something like this, people notice. His influence is not insubstantial and his message will be seen by just about all people. All except readers of Mishpacha Magazine’s print edition. Which of course did not publish that picture because of its policy of not publishing any pictures of women.. (It is, however, published in the online edition.)

How ironic it is that a picture as important as that about which Yisroel rightly raves cannot be published. It is said that one picture is worth a 1000 words. Well, I suppose the 1000 or so words of Yisroel’s column did that. But the impact of the visual cannot be overstated even when there are over 1000 words written about it. Making its omission almost comical.