How Could God Do This to Us?! 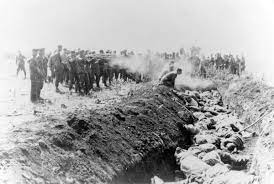 The greatest tragedy to befall the Jewish people is the destruction of our Batei Mikdash - the first and second holy temples in Jerusalem.  Today, Tisha B'Av, is the day we commemorate that tragedy by fasting and prayer lamenting their destruction as well as all the other tragedies that have befallen us since then.

We ask of God, Eicha ?! How could He do this to us? A question that we ordinarily are not permitted to to ask when tragedy happens. What right do we have to ask that question? How dare we?! We are supposed to accept God’s judgment no matter how bad it is for us. In fact we are supposed to bless God even when tragedy strikes. Which is why we recite Tzadok HaDin  - blessed is the true judge when a close relative dies. It is why we say, Baruch Dayan HaEmes whenever we hear of anyone dying.

Why are we permitted to ask this question? The answer, says Rav Yosef Dov Soloveitchik is that the precedent was set by the prophet Jeremiah who was given a Heter by God Himself  Who instructed him to write the first sentence in the book of Lamentaions: Eicha Yoshva Vodad.

The reason he was given this permission is because the tragedy was so overwhelming that God gave unlimited freedom  to Jeremiah and anyone else to pose this otherwise impermissible question. A question that would have been inappropriate under any other cicumstances. That is why the word Eicha is featured so prominently in the Kinos we say today.

That very same kind of question was asked a lot by victims and survivors that suffered unimaginable tortures during the Holocaust. How could God let this happen? The level of suffering on such a massive scale was unprecedented in all of Jewish history. 6 million Jews died horrible deaths. Survivors suffered unimaginable tortures. Both physical and mental.  In many cases survivors saw their own children, parents, or siblings murdered right in front of them.

It is true that there have been horrific deaths recorded in Jewish history that are comparable to what happened in the Holocaust. Many them recorded in the Kinos we recite on this day. One of which that is the most horrific is that of the Asarah Harugei Malchus – ten of the greatest Jewish figures in Jewish history that were mercilessly killed in the most torturous fashion. These kinds of horror stories happened many times over during the Holocaust.

I would like to suggest that even though God did not dictate a Heter to ask this question to survivors of the Holocaust – as he did to Jeremiah after the destruction of the Beis HaMikdash - they might be permitted to do so as well. If there was any tragedy that this kind of question can be asked of God, the Holocaust is it.

Be that as it may, I am not the one to  judge anyone for asking what is otherwise a forbidden question. But I have to believe that a merciful God allows even the most devout Jews among us to ask that about the Holocaust. Because never in Jewish history have so many Jews been killed just because they were Jewish. Not even at the time of the destruction of either of the Batei Mikdash.

What does bother me, however, is when someone tries to answer that question and tell the world why  the Holocaust happened. I think it takes a certain degree of hubris to make such statements. We cannot know why God does what he does in our day. Prophesy has long ago ceased among mankind. God has truly hidden His ‘face’ from us.  Explanations about why God allowed the Holocaust  happen is a slap in the face of every survivor that lost loved ones in the Holocaust.  We can ask God why, But only He can provide the answer. He has unfortunately chosen not to do so, Yet.

In the meantime we pray for the day when God will redeem us and hopefully provide the wisdom to understand it all. Until then… we wait patiently.

Posted by Harry Maryles at 2:39 PM