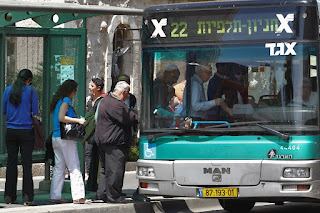 It happened again. A woman had the audacity to sit in a front seat of a bus in Israel. For this she had her head handed to her. From Ynet:

Video footage shows group of 20 men violently demand the woman moves to the back of the bus, pulling her hair and shoving a used sock in her face; 'I came home shaking,' woman says of her ordeal.

As noted this is not the first time a woman was harassed for sitting in the wrong part of the bus. The same thing happened about 15 years ago to Miriam Shear. In both cases the woman was observant.

These are not the only cases of woman being harassed for refusing to move to the back of the bus. Nor is the violence limited to buses. It happens wherever isolationist Charedim can be found.

Isolationist Charedim are those who choose to isolate themselves from the rest of society for fear of being influenced by all their negative ‘anti Torah’ values. They are in a class all by themselves and can be found in various enclaves in both Israel and the US. Of course in a democracy people have the right to live any way they choose  But not when there are consequences like what happened on that bus. Which are exposed for all the world to see. Especially when consequences like that happen so often.

There is no hard line to be drawn between mainstream and isolationist Charedim. One might find it to be a sort of continuum based on the extent taken to be insulated from the values of the ‘outside world’. But there is a line crossed when insulation becomes isolation. That happens when entire communities are formed for that purpose along with various physical and mental barriers designed to prevent any of those values from somehow seeping in. Characterizing them all as evil.

I of course realize that the kind of people that do this are the extremists among them. But they are not the same extremists in each case. That means that in the aggregate, there are thousands of such extremists within isolationist enclaves all over the Charedi world.  A world that due to their typically large families is growing exponentially.

It is not enough to say that these are a few extremist hooligans. And that the vast majority of the Charedi world would never do that. And even condemn it. I’m sure that’s true. But there is ample evidence that the majority of those that live in those isolationist communities do sympathize with these extremists, agree with their motives. Perhaps secretly even praising them for their courage to act as zealots in pursuit of keeping the ‘purity’ of their neighborhood intact.

To be clear, I do not believe that mainstream non isolationist Charedim are anything like this. I doubt that you will find too many that would support extremist violence – even if it for a cause with which they might agree. They will indeed condemn it. But what many of these mainstream non isolationist Charedim also do is defend the motives of the isolationists based on a common value system with respect to mingling of the sexes. They might argue about the degree to which one should go in that direction. But they surely agree with the principle.

Now I certainly agree with their right to have such values. But when I start hearing mainstream Charedim making excuses and apologetics, based on those common values, it disappoints me. There is no excuse. No apology to be made. The fault lies with the very isolationist values with which their leaders and teachers imbue their public. Values that are common to all isolationist communities regardless of where they are located

That is made obvious by the name calling that is practically universal by extremists who attack women that they see as hindering their goals.  Calling them ‘Whores and Shiksas’ for example is a common epithet uttered by them regardless of which isolationist community they come from. Whether it is Jerusalem or Bet Shemesh. That can only mean that this is how their leaders and teachers refer to non observant Jews. Or even  observant Jews that do not share their values. At least not to the extremes they do. It’s about their Chinuch. Maybe  ‘Whores and Shiksas’ are  not the exact words they use. But the message is clear.

This is not a Modern Orthodox/Centrist versus Charedi issue. We should all be on board here in standing firm against – not only the extremists themselves, but against the way their leaders and teachers talk about the outside world. A world that includes observant Jews that do not share their extreme values. That is directly related to the kind violence we so often find done by these extremists on behalf of those values

Unfortunately what I often find to be the case instead is that much of the Charedi world refuses to see the broader implications of the extremist violence they do condemn. They will come up with all kinds of apologetics that excuses the larger isolationist commuities - limiting their condemnations stircty to the extremist hooligans themselves.

But that defends the indefensible, in my view. Sometimes they will deflect challenges to them by trying to change the subject. Or by by pointing to violent acts done by other communities -  which may be even worse.

But that does not solve the problem. It only adds to it. Excusing their leaders and teahcers of any responsibility by saying things like, ‘They have nothing to do with those extremists’. And ‘They wouldn’t listen to them anyway’. That will not do. Nor will it do just call them out  on it. Or even condemning them. They must change the way they educate their people. They must stop vilifying secular Jews and Israeli leaders as anti religious. They need to honor the words contained in the siddur they all recite which say, ‘The  ways of the Torah are pleasant’. Saying those words are meaningless unless they live by them.

Mainstream Charedi leaders need to stand up, stick they collective heads out the window and yell, ‘I can’t take it anymore’. And once and for all ostracize these isolationist communities until they actually change the way they educate their people. If they don’t change it, then they should stay ostracized

I don’t know how many times I need to say it. But I will keep saying it every time it happens in the hope that I can reach as many people as possible - especially mainstream Charedim - to join me in spreading these truths to as many people in their communities as possible

Posted by Harry Maryles at 1:17 PM