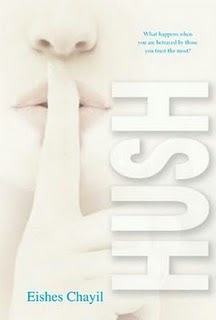 One of the more riveting books I have ever read is the one I just completed. ‘Hush’ written anonymously by ‘Eishes Chayil’ should be mandatory reading for every religious Jew that cares about their children. But most importantly it should be read by the Charedi and Chasidic world. The more insular the community the more important it is to read this book.

It is a scathing indictment of the insularity that is so important to them. Because it is that insularity that has – and probably still is – causing them the most harm. And yet I doubt that most people in their world would agree with that statement.

One might think that a book on sexual abuse in the Chasidic world would be written by an expatriate Chasid who went OTD with an agenda to destroy it. But one would be wrong. This book was written by a young Chasidic woman whose love of that world permeates almost every page of it. She paints a glowing picture of Chasidic life in a light-hearted and humorous way. The first few chapters hardly gives away the coming storm caused by the sexual abuse she one day witnessed as a 9 year old child.

In many ways this book opened my eyes to how this community deals with God, their own community, and the outside world. It corroborates much of my own understanding about them. Their insularity is so complete that a young woman generally has no clue about the act of procreation until she is ready to get married.

Gittel, the main character of this story, did not find out about sexual intercourse until she started taking Kallah classes! I’m sure that isn’t true in every case but my guess is that this is typical in the Chasidic world – especially for women. The more insular – the more true it is.

The attitude towards non Jews is also explored in this book. A secondary character by the name of Kathy - a religious Christian- is given a very sympathetic portrayal as a caring human being that knows better how to deal with sex abuse than do the Chasidim or their leaders. And Kathy’s views about God are far more mature than those that seem to be taught to Gittel.

The mischaracterization, mistrust, and hatred of the ‘Goy’ is prominently featured in the story. Not that they are ever mean to them. They generally treat non Jews with respect in intrapersonal relations. But privately the attitude is exactly as I have described it in the past. The fear and hatred of the ‘Goy’ and their ‘Goyishe ways’ is transmitted from generation to generation by those who experienced the worst of gentile behavior in Europe via pogroms and eventually the Holocaust.

The ‘Kathys’ of the world that are so common in America in our day - do not get any exposure among Chasidim because of that insularity. It is only because of their circumstances that a strong personal relationship developed between Kathy and Gittel. That gives Gittel a truer picture of non Jews. (Not that the relationship is condoned by her parents.)

If there is one thing that Chasidim focus on the most, it is Shiduchim. Getting married is their number one concern it seems and everything they do revolves around that. So when sex abuse appears - it is buried. No one wants to deal with it because the mere mention of it taints them and everyone connected with the abuse. Chasidim in particular go to great lengths to hide any incidence of abuse.

It is almost as if being in the same room with someone who even knows about it taints them. The fear of not getting married drives almost everything they do. Reputation is – everything! The slightest taint drives people away from that family. The difficult world of Shiduchim becomes an almost impossible world for them.

If sex abuse is discovered it is usually met by denial: ‘It can’t be true.’ Not him.’ ‘He’s too perfect.’

The abuser in this story is exactly that - the perfect Jew from a great family doing what God mandates of him better than just about anyone! For those who don’t know he is a sexual predator – which is virtually everyone – he is admired.

Even in the rare instance that an accusation is believed because of a trustworthy witness, the fear of how this will taint the family of the witness overtakes every other consideration. ‘Don’t go to the authorities’. ‘No one will believe you.’ ‘Instead you will be painted as a villain yourself for besmirching a fellow Jew - and such an honorable one at that.’ You will bring shame onto the whole community and be ostracized right along with the rest of your family’. So… Shah! Zei Shtill – Hush up!

What this results in is further abuse by an abuser who operates with impunity. He attacks his victims in private where no one can see. And when he is finished he goes about his business the same way he always does. In this story – as an exemplar of Chasidic Judaism.

The fallout of this attitude is deadly, not only for the victim but for those who know about it and are forbidden to say anything.

What is interesting to note is that because of her insularity and innocence, Gittel did not even fully understand what she was witnessing – even years later into her late teens. She did not ever even hear the phrase ‘sex abuse’ or know exactly what rape was.

This is the word that insularity creates. It breeds ignorance to such an extent that victims are shockingly unprepared to deal with it when it happens. They may not even fully understand that what is being done to them is sexual abuse. And witnsses may not fuilly understand what they are witnessing. These subjects are so taboo that the remotest mention of it is hushed up!

The attitude is: ‘These things do not happen in our world.’ It’s Shmutz.’ ‘It only happens by the Goyim because of their vacuous and hedonistic lifestyles.’ ‘It never happens here.’ ‘Why talk about it?’ ‘Talking about it will only bring shame to our family and community and ruin our Shiduchim.’ ‘That is exactly why we build our walls so high.’ ‘So that these things don’t get in.’

But they do get in. There are plenty of victims from that world including those who know and are stifled from saying anything about it. Least of all to the ‘Goyishe authorities’.

Again - no one should misunderstand. This book is not an indictment of Chasidism. In fact I would say the opposite is true. It is a portrait of people who serve God joyously. With children flourishing in warm and loving environments with good families and good values. It’s all good. Accept for that one little thing. And that ‘thing’ can kill and ruin lives. Lives that could be spared if silence was not so golden.

The young Chasidic woman who authored this biographical story is a hero for daring to tell her story. She gives the reader a glimpse into the world of Chasidim with all its warmth - and all its warts.

I understand that ‘Hush’ has just been nominated for an award by the American Library Association. Well deserved if it wins. I hope it does.
Posted by Harry Maryles at 12:45 PM